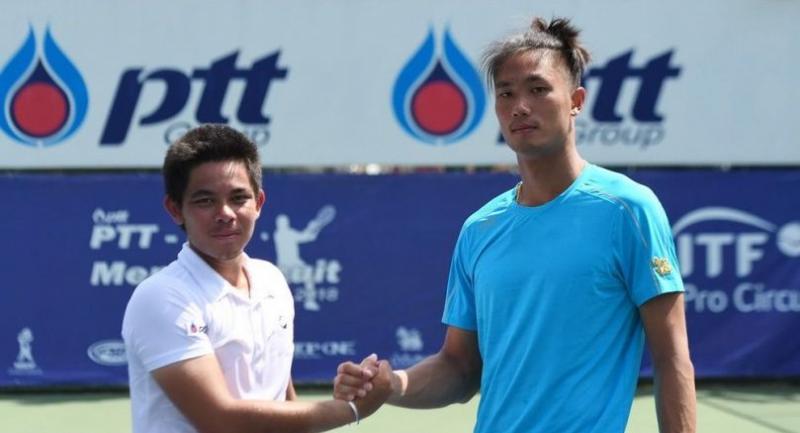 THAI TOP SEED Wishaya Trongcharoenchaikul and fifth seed Pruchya Isaro set up a rare all-Thai men’s singles final showdown on the ITF Men’s Futures Circuit in the US$15,000 PTT-ITF circuit at the Lawn Tennis Association of Thailand on Saturday.

This will be the first time that two Thais will be clashing in the men’s singles final round of an ITF Future event, which comes a breath of fresh air following the scarcity of talented male players making an impact after the retirements of former top 10 Paradorn Srichaphan and his sucessor Danai Udomchoke, a former top-80 player.

Wishaya, 23, had a much easier time in the semi-final as his American rival Adam El Mihdawy retired with an injury at 0-4 in |the first set while the in-form Pruchya, 22, dropped just four games to beat Soichiro Moritabi of Japan 6-2 6-2.

Wishaya became only the fourth Thai to lift a Men’s Futures trophy when he won on home soil last October, while Pruchya has yet to capture a title after reaching the finals twice in 2013 in Bangkok and in Vietnam a few months ago. “No matter what happens, the title will belong to a Thai,” said Wishaya, ranked 459th in the world. “I have no idea what happened before me, but I’ve never seen two Thais in the final before.”

Pruchya, now coached by former Thai No 1 Danai, is also delighted to play his long-time friend in the final of an ITF event.

“This is a good sign for Thai men’s tennis. I believe it will happen more and more if we keep working hard towards our goal,” said the 745th-ranked Pruchya, a former Davis Cup player. Both have played many times but in their recent meets on local events, Wishaya beat Pruchya twice, in 2016 and 2017. Both had a warm-up against each other on Friday as they met in the doubles finals. Pruchya and Bangkok-based Kesley Stevenson of Canada beat Wishaya and Lin Wei-de of Taiwan 6-3 6-4 10-7. In the women’s doubles final, Nudnida Luangnam and Bunyawi Thamchaiwat upset top-seeded Cho I-Hsuan of Taiwan and Wang Dan Ni of China 6-2 6-0 to win the trophy.