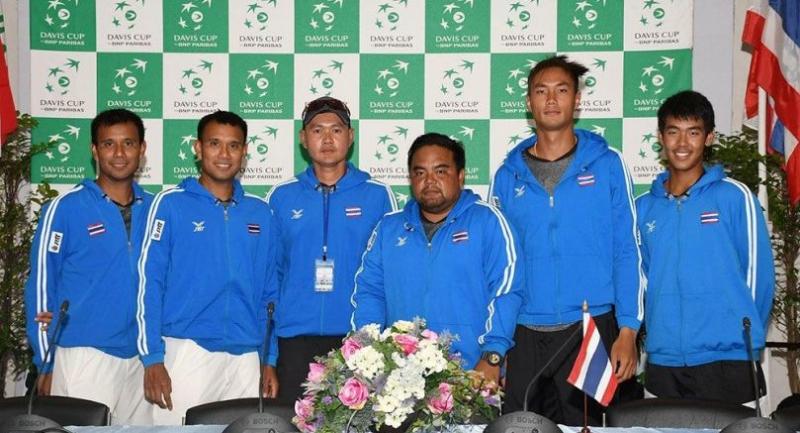 Thailand face a tough assignment this weekend as they play host to powerful Lebanon in the final round of the Davis Cup Zone Asia/Oceania Group II at the Lawn Tennis Association of Thailand (LTAT) in Nonthaburi.

The Kingdom’s No 1 and world No 453 Wishaya Trongcharoenchaikul will line up alongside doubles experts Sonchat and Sanchai Ratiwatana, who are ranked in the doubles top 130, but the LTAT sprang a surprise by opting to send unfancied Palaphoom Kovapitukted, the 18-year-old whose ranking is only world No 1398, as the second singles player.

On the contrary, Lebanon arrived in Thailand with all their A-list players, including world No 370 Benjamin Hassan, who is based in Germany and has won all three of his Davis Cup matches to date, and world No 643 Hady Habib, who hails from Texas and has a win-loss record of 17–4.

The two imported players of Lebanon, each with one ITF singles title this year, should have the edge over the Thai No 2, who has never moved beyond round two of a Men’s Futures in singles.

But Thai captain Weerapat Doakmaiklee is convinced that his Thai No 1 Wishaya and the twin brothers will win their rubbers and yield three points for the home team to return to Group I for the first time in three years.

“I believe Wishaya is good enough to win two rubbers while the Ratiwatana brothers are a stronger doubles team than the Lebanese side,” said Weerapat, who remains optimistic even his squad is without a more experienced player Jirat Navasirisomboon (ranked 1318), who was overlooked for this tie.

“Even with Jirat, there’s no guarantee he will beat Habib who is supposed to be better judging on their rankings. Our players just have to give Lebanese as tough as possible matches in order to win the tie,” the Thai skipper added.

Nasri Michel Achkar, captain of Lebanon said: “We believe we can beat Thailand even though Thailand has a strong doubles team.”

Saturday’s session features the first two singles rubbers (Wishaya vs Habib and Palaphoom vs Hassan) while Sunday sees the doubles (Sonchat and Sanchai against Giovani Samaha and Michel Saade), followed by the reverse singles (Wishaya vs Hassan and Palaphoom vs Habib). The first nation to win three points will be promoted to Group I next year while the losers will remain in Group II.