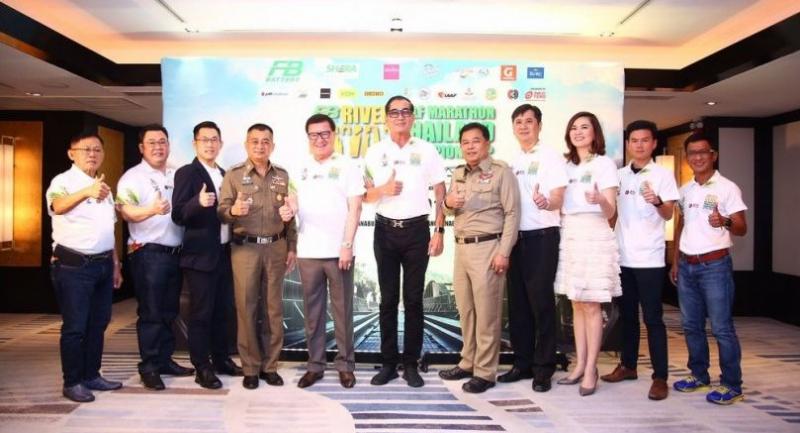 The Athletics Association of Thailand President Pol. Gen. Sant Sarutanon, middle, and organisers in a photo session during the press conference at Banyan Tree Hotel.

The Athletics Association of Thailand (AAT) and BEC-Tero Entertainment will organise the 2018 FB Battery River Kwai Half-Marathon Thailand Championship to be held on December 9 in Muang district, Kanchanaburi.

Certified by the Asian Athletics Association (AAA) and International Association of Athletics Federations (IAAF) with support from Kanchanaburi state agencies and the State Railway of Thailand, and BEC-Tero Entertainment, the event will feature a half-marathon (21.1km), mini-marathon (10.5km) and a fun run (5km).

The route for all three events is surrounded by beautiful scenery, a major highlight being the bridge on the River Kwai, the province’s most important historical symbol. The bridge was a mammoth World War II PoW project ordered by the Japanese army, later made famous by an equally epic film.

“This is the third time the event has been held by the AAT. The past two years were successful – a huge number of runners participated. The event follows all international protocols and our staff members will be there taking care of all runners throughout the routes,” said AAT President Pol Gen Sant Sarutanond.

All runners will receive running jerseys with numbered bibs, as well as medals after completing the event. Specially made “Finisher” towels will be distributed to all Half-Marathon finishers. Sataworn “Kru Din” Chanpongsri, former Thailand national team runner and 1985 SEA Games bronze medalist, said: “I always take part in this running event, which is organised amid great natural surroundings. This is one of the events I just cannot miss.”

Applications can now be submitted through ThaiTicketMajor until October 31, 2018.