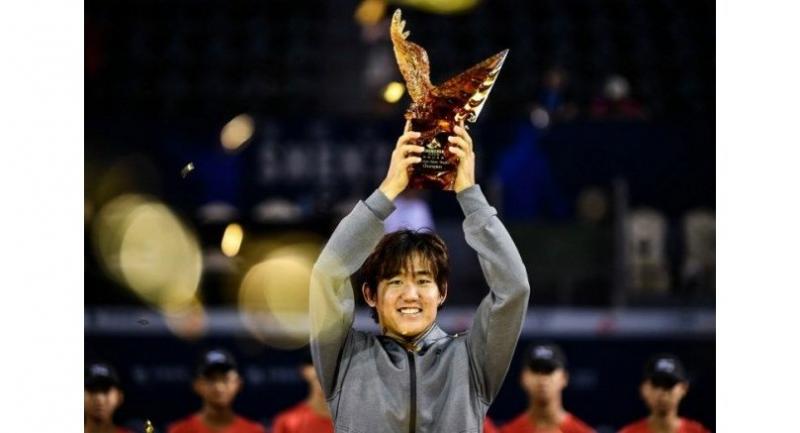 Yoshihito Nishioka of Japan celebrates with the trophy after winning the men's singles final against Pierre-Hugues Herbert of France.

The 23-year-old Nishioka, ranked 171 in the world, played seven matches across eight days at the Shenzhen Longgang Sports Centre but still had plenty of energy in a marathon final as he threw himself at everything Herbert could offer.

As the match clock ticked towards two-and-a-half hours in the southern Chinese city, Nishioka sealed the victory on his fifth match point -– and looked as though he could hardly believe what had just happened.

Twelve months ago, the Japanese player was stuck at home pondering his future after suffering an ACL injury. He will now return to the world's top 100 after that injury saw his ranking plummet to as low as 362.

The 27-year-old Herbert rattled off 12 aces and helped his opponent’s cause with nine double faults as he poured on the power. But the Nishioka game plan -– waiting out the barrages and keeping his opponent moving -– worked a treat.

Both players came into the final unfancied and unseeded and both had yet to claim a ATP Tour singles title. Herbert had only made one final previously, losing in straight sets to South African Kevin Anderson at the Winston-Salem Open in the US in 2015. Nishioka had never before graced the big stage.

Before the final Nishioka had attributed his run of form -– kick-started by a title at the ATP Challenger Tour stop in Gimcheon, South Korea, four months ago -– down to a change in attitude.

The 1.7-metre (five-foot-seven) Nishioka revealed he had previously been trying to play like "six footers" such as current world number one Rafael Nadal of Spain. But he had turned instead for inspiration to Chile's former world number one Marcelo Rios, who stands around 1.75 metres (five-foot-nine).

The odds were stacked in favour of Herbert, a three-time Grand Slam doubles title winner with partner and compatriot Nicolas Mahut. But Nishioka finally fulfilled the promise he had shown as one of Japan's top juniors.