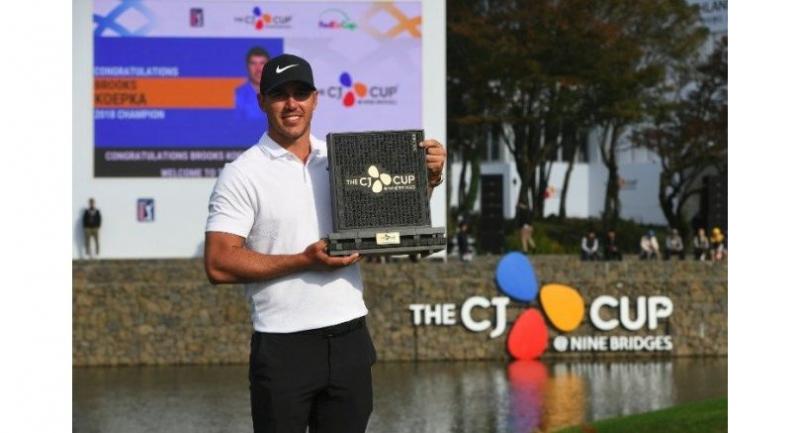 Brooks Koepka of the US poses with the trophy during the awards ceremony after winning the CJ Cup golf tournament at Nine Bridges golf club in Jeju Island.

Triple major champion Brooks Koepka will overtake Dustin Johnson and Justin Rose to become world number one for the first time after winning the CJ Cup on Sunday by four strokes.

"It's a dream come true," said Koepka after completing a final round of eight-under par 64 at the US PGA Tour event in South Korea, highlighted by a chip-in for birdie on the 16th, to finish 21 under par.

"I don't think I ever thought in my wildest dreams I'd be the best golfer in the world," he added.

"It's amazing to go world number one with a win. I always wanted to earn my way to number one."

The 2018 US PGA Tour Player of the Year, Koepka carded a total of 267 to capture first prize in the $9.5 million tournament and hold off fellow American Gary Woodland, who poured in 11 birdies as he charged to a final-round 63 for a 271 aggregate.

The in-form Koepka, who this year won his second and third majors at the US Open and the US PGA, shook off some shaky moments early in his final round at the Club at Nine Bridges on the southern resort island of Jeju.

He started the week ranked third behind fellow Ryder Cup players Johnson and Rose, who both sat out the tournament, and will leapfrog the pair when the new rankings are officially announced on Monday.

Koepka began his final round with a four-stroke lead over fellow American Scott Piercy and England's Ian Poulter. But it was Woodland who emerged as Koepka's nearest challenger after beginning five shots adrift.

Woodland's four consecutive birdies from the sixth put him into a share of the lead at 14-under as Koepka, playing two groups behind, was trading three birdies with two bogeys on his front nine.

Woodland blinked first on the inward half with a bogey at the 10th, and Koepka birdied that hole a few minutes later to reopen a two-shot lead.

Woodland bounced back with two straight birdies at the 12th and 13th, but Koepka coolly matched the feat.

Both birdied the 15th and after Woodland had another birdie at the 16th to close to one, Koepka put his approach to the same par-four hole into the left rough.

With a bogey looming, Koepka instead chipped in for a thrilling birdie to reach 19-under.

Moments later, Woodland bogeyed the 17th to fall three strokes behind and despite bouncing back with a birdie at 18, Koepka closed with an eagle on the last to cap off the victory in style.

"I just hung in there. I'm not somebody that's going to panic if things go the wrong way, pretty sure everybody can tell that," Koepka said.

"I just kind of hang in there, wait for my holes, I know I'm going to have some good looks and when I do, you've got to capitalise on them."

Tags:
Koepka to become world number one for first time after CJ Cup win Koepka to