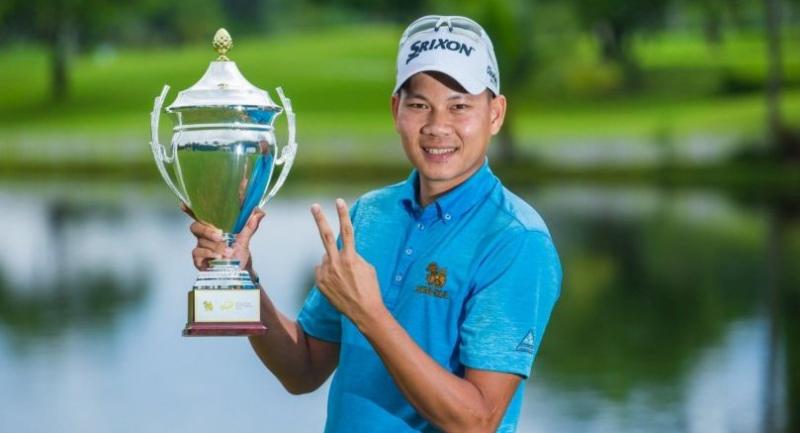 Chonburi – TIRAWAT Kaewsiribandit won the Bt3-million Singha Pattaya Open after thunderstorms forced organisers to scrap the final round for the first time in 15 years at Burapha Golf and Resort on Sunday. Three rain interruptions meant all 56 players were unable to finish their round by 4.30pm, in the season-ending All Thailand Golf Tour event.

The last player who won after only 54 holes at the ATGT was Boonchu Ruangkit in the 2003 Singha Classic at the Springfield Royal Country Club.

Tirawat, leader after the third round at nine-under-par 201 was awarded the trophy and prize money of Bt450,000, seven days after claiming his maiden Asian Tour win in Karachi.

“I have never played in a tournament interrupted this much by rain. But even if we had had to finish the round, I would still have been confident of my chances as I’ve been in great form since Pakistan last week,” said Tirawat, who will turn 29 on Wednesday. “This is an amazing birthday gift for me. I’m still proud of the title even it’s decided on three rounds,” added Tirawat. This is his second All Thailand Tour title after winning at the Laem Chabang International Country Club in July last year.

Halfway leader Rattanon Wannasrichan was happy to finish after three bogeys in his first eight holes on Sunday. The 23-year-old from Chanthaburi ended lone second on seven-under 202 and won the Bt277,500 runners-up prize money.

Rattawon will end the season as Order of Merit winner with total earnings of Bt1,091,175 from six events, with Pavit Tangkamolprasert second on Bt907,925.

“I’m so okay with this,” said a grinning Rattanon. “I didn’t hit very well today. Winning the Order of Merit and ending the year as No 1 player on tour was my target this week,” said Rattanon who won the first stop of the ATGT in Khon Kaen in February.