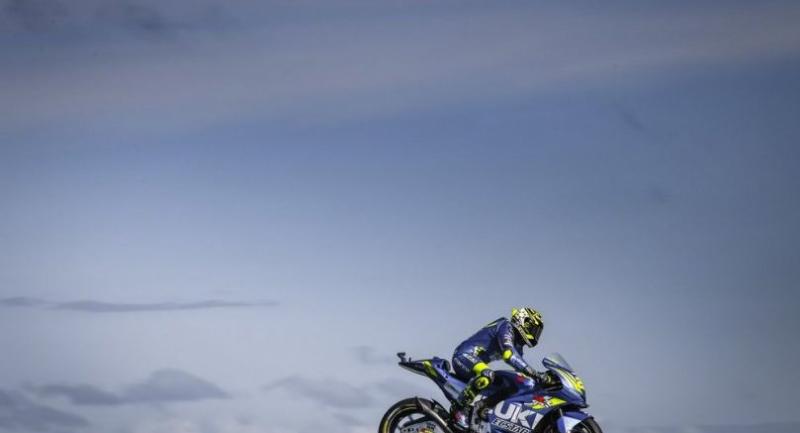 Iannone had a positive first day Down Under.

Andrea Iannone (Team Suzuki Ecstar) left it late to leap to the top of the combined timesheets at the Michelin® Australian Motorcycle Grand Prix, setting a 1:29.131 on his final lap to oust Danilo Petrucci (Alma Pramac Racing) from P1.

The two Italians were separated by 0.160, with FP1’s quickest man Maverick Viñales (Movistar Yamaha MotoGP) completing the top three made up of three different manufacturers. One of the biggest headlines of the day was less positive, however - with LCR Honda Castrol rider Cal Crutchlow, who currently leads the Independent Team rider standings, suffering a crash in FP2 that has seen the Brit declared unfit for the rest of the weekend.

He was fifth fastest on Friday before the incident and will now undergo surgery on a broken right ankle and tibia in the Alfred Hospital in Melbourne.

It was an incident-filled day on the Island as Moto3™ saw an early Red Flag and subsequent delays due to track conditions, and even after there were a few riders finding the limits. Crutchlow's fellow Honda rider Marc Marquez (Repsol Honda Team), crowned Champion in Japan, was also a crasher - escaping unscathed from a fast one at Turn 10.

He also suffered a run off later in the day, as did arch rival Valentino Rossi (Movistar Yamaha MotoGP). The two men ended the day a little down the timesheets, with Marquez in P7 and Rossi rounding out that all-important top ten; inside it by 0.046. But Rossi's key rival for second overall in the standings, Andrea Dovizioso (Ducati Team), outpaced both as he took fourth just ahead of Crutchlow - and steered clear of the drama.

Johann Zarco (Monster Yamaha Tech 3), meanwhile, was only 0.070 behind Crutchlow to complete the top six. The Frenchman was back on front row form at Motegi and opened the Australian GP well, ahead of Marquez. With Crutchlow now unable to complete the weekend, both Zarco and Petrucci will be looking to gain on the Brit in the Independent Team rider standings.

In P8 there was some top news for home fans with another Independent Team rider as Jack Miller (Alma Pramac Racing) ended the first day well within that all-important initial top ten - as well as only a tenth off Marquez. He was just ahead of Team Suzuki Ecstar's Alex Rins in P9 to make it both Hamamatsu factory machines in the top ten.

That's it from a frantic Friday on Phillip Island. Come back for FP3 on Saturday morning to see who will make it through to Q2 qualifying, before the grid is decided from 16:10 local time (GMT +11).