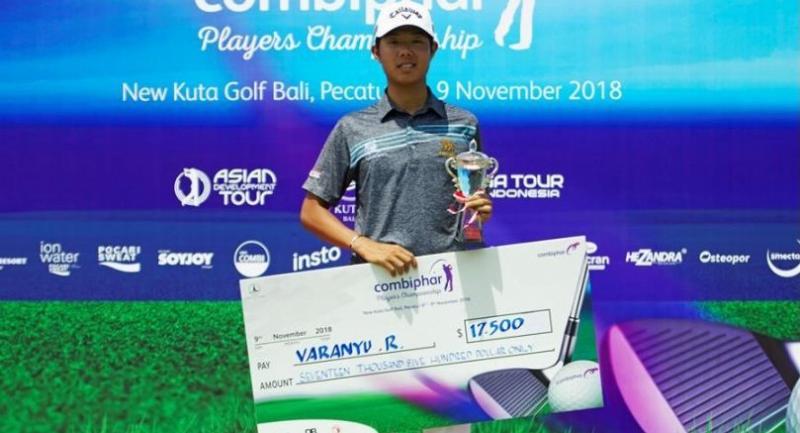 Bali -  Thailand’s Varanyu Rattanaphiboonkij held his nerves to complete a wire-to-wire Asian Development Tour (ADT) victory for the second time this season at the US$100,000 Combiphar Players Championship on Friday.

Varanyu, who had led from start to finish for his maiden Asian Development Tour (ADT) title in May, closed with a two-under-par 70 and a 15-under-par 273 total to win by one shot over Janne Kaske of Finland at the New Kuta Golf in Bali.

The 21-year-old Varanyu became the first player to win more than once on the region’s secondary circuit this season, following his triumph in what is the penultimate event of the 2018 schedule.

His victory, which saw him take home a winner’s prize purse of US$17,500, would also catapult him to second place on the ADT Order of Merit and grab one of the seven Asian Tour cards on offer for the 2019 season.

“It’s unbelievable. I just signed up for the Asian Tour Qualifying School two weeks ago and now I got my card through the ADT! I thought I didn’t have the chance after my front nine because I was one-over and Janne was three-under.

“But I told myself to just keep playing and try my best. It’s good that I played with Donlaphatchai. I feel more relaxed having another Thai playing in the same group. That helped calm me down a bit,” said Varanyu.

After trading one birdie against two bogeys to turn in 37, Varanyu made a strong rebound with three birdies on 10, 14 and 15 before making some crucial par saves on his way home.

“I made a long par putt from about 13 feet on the 16 and I hit a good shot from a difficult lie to about five feet to save par on the par-four 17. Then on the 18th hole, I had like two putts to win,” added Varanyu, who turned professional in 2015.

Kaske, a two-time Asian Tour winner, battled to a 70 to take second place while American Justin De Los Santos finished five shots back of Varanyu in third following a 68. Malaysia’s Shariffuddin Ariffin carded a 70 to settle a further shot back in fourth on 279.

Miguel Carballo of Argentina continues to lead the ADT Order of Merit with a season’s haul of US$41,713 while Varanyu trails by US$8,290 in second. Nitithorn Thippong of Thailand, who missed the halfway cut this week, slipped to third.

Despite missing out on the victory, Kaske would move to fourth place on the money list thanks to his runner-up finish. American Han Lee, South African Mathiam Keyser and Itthipat Buranatanyarat of Thailand sits in fifth, sixth and seventh positions respectively.

All ADT events offer Official World Golf Ranking (OWGR) points. Varanyu will receive six OWGR points thanks to his win and the top six players and ties will also earned points based on a sliding scale.

The 2018 ADT season will culminate at the PGM Maybank Championship, which will be held at the Saujana Golf and Country Club in Malaysia from November 28 to December 1.