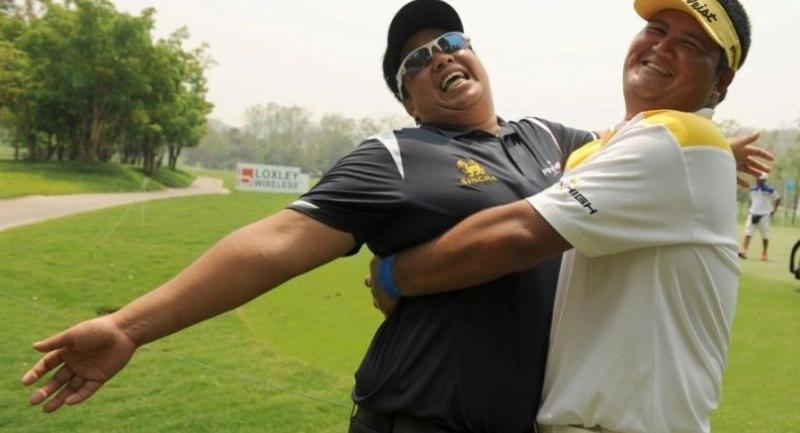 When Prom Meesawat takes his bow at the ISPS HANDA Melbourne World Cup of Golf in Melbourne next week, the Thai will stand tall as he emulates his father’s footsteps in representing the Kingdom at the prestigious team event.

The 34-year-old was picked by close friend, Kiradech Aphibarnrat, to team up and fly Thailand’s flag together, where the duo will take on the world at The Metropolitan Golf Club from November 22 to 25.

“My dad (Suthep) played in World Cup of Golf previously, so it’s nice I will get a chance to play in the World Cup too and follow in his footsteps. To have the opportunity to represent Thailand is nice for the family,” said Prom, who is a two-time Asian Tour winner.

Strong family ties have provided the foundation in Prom’s golf career. His father Suthep, now 70, was the first local golfer to win the Thailand Open in 1991, which needless to say, inspired Prom to play the game as a career.

He also regards Kiradech as family after both golfers grew up together under the tutelage of late coach Natpasit Chokthanasart, better known as Pro Jew in the local golfing fraternity, during their junior days.

“We played a lot of golf together and we’ve said we must partner together in a team event at least once. So when he asked me to play in the World Cup of Golf, it was really nice to hear that,” said Prom. “I’m so happy to be picked by him. We grew up together, had the same coach, have been good friends for a long time. Our families are also very close,” he added.

While Kiradech, who has enjoyed three top-fives in the World Golf Championships in 2018, has been blazing a new trail for Thai golf recently where he earned a PGA TOUR card for the 2018-19 Season, Prom has enjoyed a steady season on the Asian Tour with three top-10s and seven other top-25s.

Nicknamed the Big Dolphin due to his physique and the fact that he hails from a coastal town, Prom believes he and Kiradech can produce a good showing for Team Thailand.

“We’ll go out and enjoy ourselves,” said Prom. “In fourball, he’s very aggressive and that’s a good thing. I will be his back-up and in foursomes, my accuracy will help the team. I think we can contend. The way I’m playing this year and Kiradech has played so well too, we can have a chance. Kiradech has stepped onto the highest level and we’re really proud he’s flying the Thai flag on the PGA TOUR.

“Our senior players, Boonchu Ruangkit, Thaworn Wiratchant, Prayad Marksaeng and Thongchai Jaidee, have done a lot for golf in Thailand, so now it’s my generation and Kiradech’s generation. It would be the right time to have a good finish in the World Cup of Golf and show Thai golf and Asian golf can win anywhere.”

Prom, who is five years older, recalled the first time he met Kiradech and recalled how they struck an immediate bond. “He was about eight or nine and I was around 14. We played junior golf together, but under different age groups and our coach got me to practise with him. We hung out together and always traveled together. Even then we were playing on the European Tour for several years, we were regular roommates. He’s a genuine guy,” said Prom.

Kiradech, currently ranked 39th in the world, remembers the first time he and Prom went head-to-head in a junior event. “I started well and got eight shots ahead and in the car ride home, I told him ‘I’ll kick your ass’ and then he goes and shoot six and seven under! On the last day, I was one behind with one hole to play and walking up the 18th tee, I told him I wanted to win the event badly and as he’d won it twice before, I asked him to give me the win.

“He laughed at me and as I lined up a 50-foot putt for birdie, he walked around me and said if I holed that putt, he’d give me the win. I laughed too as I knew I wasn’t going to hole the putt. He then told me that one day, we’ll have to team up and not play against each other. This dream is coming true,” said Kiradech.

Prom’s wife is scheduled to deliver their second child, a boy, this weekend and hopes the latest addition would eventually pick up the sport and keep up the family tradition.

“I hope he follow my footstep too,” said Prom.

A Thailand win at the World Cup of Golf would certainly provide the inspiration for the new-born, and Prom and Kiradech are certainly determined to have all the fun in the world at The Metropolitan Golf Club as they live up a childhood promise together.