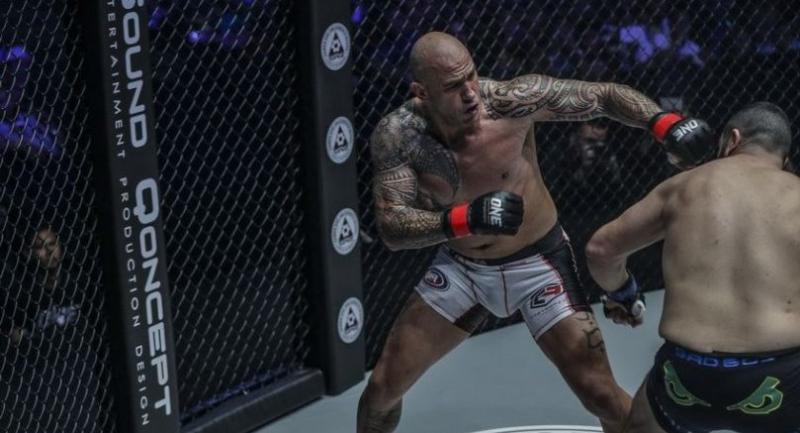 Manila -  ONE Championship™ returned to the Mall Of Asia Arena for another exciting evening of world-class martial arts action.

ONE: CONQUEST OF CHAMPIONS featured a series of compelling bouts, punctuated by two unforgettable championship clashes that left fans on the edge of their seats.

In the co-main event, Eduard Folayang of the Philippines defeated Singapore’s Amir Khan via unanimous decision to capture the vacant ONE Lightweight World Championship.

In the main event, reigning ONE Heavyweight World Champion Brandon “The Truth” Vera of the Philippines made quick work of Italy’s Mauro “The Hammer” Cerilli, stopping his opponent with a well-placed left hook counter to the jaw that turned the lights out on the Italian. After an aggressive Cerilli stalked Vera across the cage, the Filipino-American took a step back and uncorked the counter that landed right on the button. Cerilli was out before he hit the canvas as referee Olivier Coste stepped in to call a halt to the contest just passed the one minute mark. The victory also earned Vera GoDaddy KO of the Night honors.

Brandon Vera, ONE Heavyweight World Champion, stated: “Manila, all my countrymen, I’ve missed you all. Two years was a long time. I’m sorry I’ve been away for so long, but it looks like I can still do it. I’ve been watching Mauro’s tapes every night. Even as I sleep, I watch him train. I watch him fight. I watch everything he does. I know he swings hard. He did punch me in the mouth and it hurt, and then when he fell down, I was pretty surprised. So I’m glad I got that left hook in and dropped him with it. In the world of martial arts, the Philippines owns five world titles. We can do this. Continue your support. Let’s get all the belts!”

In the co-main event of the evening, the Philippines’ Eduard “Landslide” Folayang secured a thrilling five-round unanimous decision victory over Singapore’s Amir Khan to capture the vacant ONE Lightweight World Championship. Folayang dominated Khan from start to finish, punishing his younger opponent with a variety of striking combinations featuring spinning heel kicks and sharp elbows. Khan tried his best to counter Folayang’s offense, but appeared a step slower and couldn’t pin down Folayang’s timing. In the end, all three judges saw the bout in favor of Folayang.

Former ONE Featherweight World Champion Honorio “The Rock” Banario of the Philippines overcame a game effort from challenger Rahul “The Kerala Krusher” Raju of Singapore to win by unanimous decision after three rounds. Banario dominated Raju in striking exchanges while also threatening with submissions in the first round. Raju made it a competitive bout in the second frame, but Banario came alive once again in the third and nearly finished the Singaporean with a rear naked choke. In the end, all three judges saw the bout in favor of Banario.

In a spirited ONE Super Series Muay Thai contest, bantamweights Saemapetch Fairtex of Thailand and Alaverdi Ramazanov of Russia put on an absolute show for fans at the Mall of Asia Arena. Ramazanov used his height and length to pose problems for Saemapetch early, but the Thai veteran would start to come on in the second round. Although Ramazanov would try his best to outwork his opponent, Saemapetch proved much too explosive and powerful. After three rounds of action, all three judges saw the bout in favor of Saemapetch to win by unanimous decision.

James Nakashima of the United States authored a solid all-around performance in his ONE Championship debut, dominating Russia’s Raimond Magomedaliev to earn a unanimous decision victory. Nakashima bucked a slow start in the first round after Magomedaliev’s range posed a problem for the former American National Wrestling Champion. Nakashima’s grappling prowess was put on display in the succeeding rounds as he took Magomedaliev down at will and consistently pounded him out. In the end, all three judges scored the bout in favor of Nakashima.

Japanese kickboxing ace Hiroaki Suzuki was victorious in his ONE Super Series debut, picking up a unanimous decision win over Lithuania’s Deividas Danyla. Danyla controlled the pace in the opening round, but Suzuki connected on a left hook that sent Danyla to the mat to close the first frame. In the second round, Danyla continued to put the paces on Suzuki who appeared to grow stronger as the bout wore on. In the third round, Suzuki turned up the pressure with a stream of thunderous kicks and punch combinations, enough to earn him the nod on all three judges’ scorecards.

French Muay Thai star Samy “AK-47” Sana picked up his first win on the ONE Super Series stage with a unanimous decision victory over Armen Petrosyan of Italy in their three-round kickboxing contest. The former WBC and A1 Muay Thai World Champion was dominant from bell to bell, rattling Petrosyan with swift combinations. Petrosyan managed to keep the bout competitive, but Sana was always a step ahead, and he took home a clear-cut decision win.

In a clash between former ONE World Title contenders, Alexandre “Bebezao” Machado of Brazil returned to his winning ways with a spectacular second-round stoppage victory over Japan’s Hideki “Shrek” Sekine. Machado survived a strong first round from the Japanese grappler as he was taken down with a flurry of effective slams. In the second round, Machado showcased his striking superiority as he hammered Sekine with a barrage of heavy punches to claim the technical knockout.

Han Zi Hao took home a first-round technical knockout victory over Malaysian debutant Azwan Che Wil. Both men employed fiery offense from the start with Han utilizing his speed and power to connect on a handful of thudding strikes, knocking Che Wil down late in the first round. With a few seconds remaining in the opening frame, Han dropped Che Wil again, this time with the Malaysian signalling to the referee that he could no longer continue. The victory was then awarded to the Chinese striker.

Jeremy “The Jaguar” Miado of the Philippines sent the crowd into a frenzy with a second-round technical knockout victory over China’s Peng Xue Wen. Miado looked to trade hands early on, clipping Peng with solid punches from different angles. With Peng opting to continue exchanging strikes in the second round, Miado capitalized on the opportunity, dropping his opponent to the mat with a stinging right uppercut and then drilling a barrage of follow-up blows to force the stoppage.

In an intense battle between ONE Warrior Series alumni, Akihiro “SuperJap” Fujisawa of Japan emerged triumphant, scoring a third-round technical knockout victory over Bangkok-based Filipino standout Rockie Bactol. Fujisawa had to weather an early storm, defending against Bactol’s blazing punch combinations in the first round. He turned the tide in the second frame, negating Bactol’s striking with his top-notch ground game. In the final period, Fujisawa grinded out Bactol on the mat for the majority of the round before securing the finish with a series of hard blows.

Setting the tone for an action-packed evening was a three-round flyweight encounter between Rudy “The Golden Boy” Agustian and Asraful “Warrior” Islam. Agustian turned in a dominant performance, outclassing Islam over the course of three rounds. Banking on his superior striking and smoothly-executed takedowns, Agustian walked away with the clear-cut unanimous decision victory.

Official results for ONE: CONQUEST OF CHAMPIONS

Heavyweight bout: Alexandre Machado defeats Hideki Sekine by TKO  at 1:44 minutes of round 2

Tags:
ONE Championship™ (ONE) returned to the Mall Of Asia Arena for another exciting evening of world-class martial arts action. BRANDON VERA KNOCKS