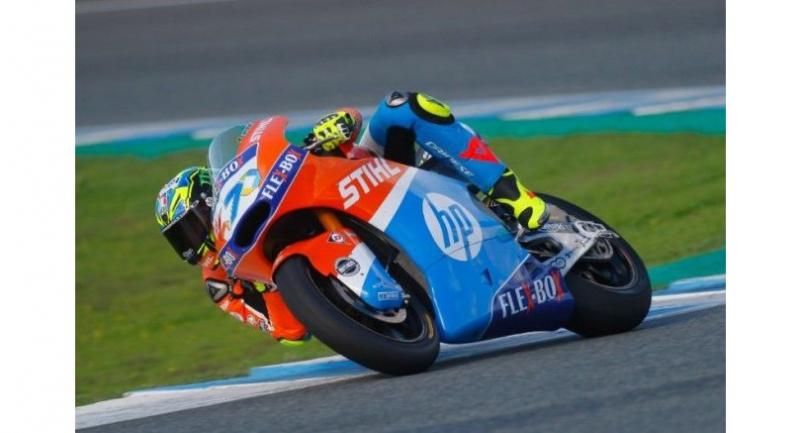 Triumph engines are GO in Andalucia as the intermediate class pit out for testing - but there's early drama as reigning Moto3™ World Champion Jorge Martin crashes and breaks his leg.

Lorenzo Baldassarri (Pons HP 40) topped the first day of Moto2™ testing for 2019 at the Circuito de Jerez-Angel Nieto, but it's reigning Moto3™ World Champion and Moto2™ rookie Jorge Martin who stole the headlines after he crashed - and was left with a left humerus fracture and a some broken bones in his foot. That means he'll be sidelined in order to recover, with his first taste of the category cut short for now. He did make a solid impression before that and was inside the top 15, however, but a 1:42.203 from Baldassarri in the final session of the day then changed the goalposts as the Italian beat compatriot Luca Marini (Sky Racing Team VR46) to the top.

The test signals the beginning of a new era not only for the rookies like Martin, but also of Triumph power - as well as some updates in the technical regulations. And it's off to a good start, with Baldassarri getting within three tenths of his 2018 pole lap at the track. Behind him and Marini, the man in third was another man with a good record at the track: Sam Lowes, as he returns to the Federal Oil Gresini Moto2 squad.

The Moto2™ riders completed four sessions throughout the day, with conditions improving in the afternoon after overnight rain had seen a damp start to proceedings. At the end of Day 1, Pons HP40’s Augusto Fernandez was fourth fastest, with Remy Gardner (SAG Team) rounding out the top five – 0.533 off the top.

The fastest rookie was Nicolo Bulega (SKY Racing Team VR46), the Italian setting the seventh quickest time of the day to finish 0.566 from P1 – a great debut for the number 11 rider. Martin was next quickest rookie, in P15, with Fabio Di Giannantonio (Speed Up Racing) P18 on the times. He was just ahead of fellow rookie Enea Bastianini (Italtrans Racing Team).

Elsewhere, Jake Dixon’s (Angel Nieto Team) Moto2™ debut ended with the British rider setting a quickest time of 1:44.401, 2.198 off Baldassarri’s benchmark, with Dixon finishing one place ahead of Moto3™ graduate Marco Bezzecchi (Red Bull KTM Tech 3) – P25 and P26 respectively for the pair as they settle in.

Moto2™ riders will be back out on track on Saturday as they continue their adaptation to the Triumph engine.