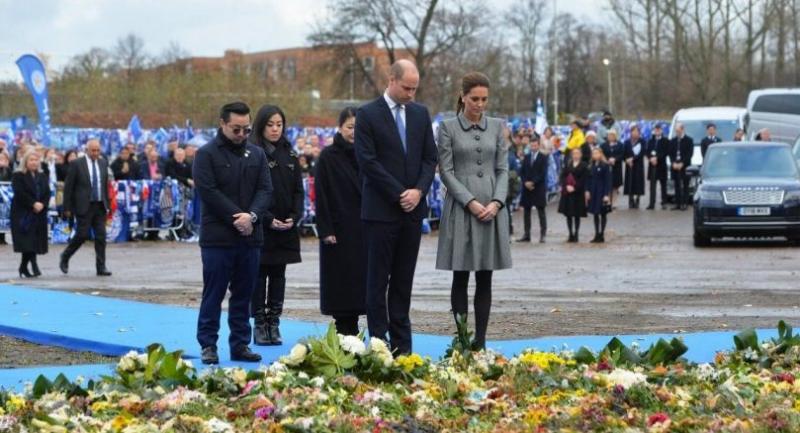 The Duke and Duchess of Cambridge at the King Power Stadium.

Vichai, who was owner and chairman of King Power Duty Free and owner of Premier League football club Leicester City, was killed on October 27 when his helicopter crashed at the stadium. Four others also died in the accident.

The Duke and Duchess of Cambridge paid tribute to the victims of the accident on a visit to Leicester along with fans, staff, family and dignitaries, who looked over the thousands of shirts, scarves, drawings and cards that had been left in Vichai's memory.

Prince William and the Duchess later mingled with other mourners.

The Prince, who is president of the Football Association, said: “Catherine and I wanted to visit Leicester to pay tribute to a man we knew, Vichai Srivaddhanaprabha and those who died alongside him in October.

“We knew Vichai as a man who cared deeply about his family and also his community.

“He of course was a man of wealth, but that wealth did not leave him disconnected from those around him. He believed in giving back.

“Catherine and I also wanted to come to Leicester because of what the people of this city, and fans of this club, have shown us all over the last few weeks.”

Following their visit to the stadium, where Vichai’s team secured its first top-flight title in the club’s history in 2016 , The Duke and Duchess travelled to the University of Leicester.

In 2016, after the team's historic win, Vichai was honoured with an honorary degree by the university.

But it was his £1 million donation in May 2018 – presently being used to fund medical research and training through the creation of a professorship in Child Health – which will continue his legacy.

Accompanied by the University’s President and Vice-Chancellor Professor, Paul Boyle CBE, the royal couple learned about the educational programmes that the club continues to support.