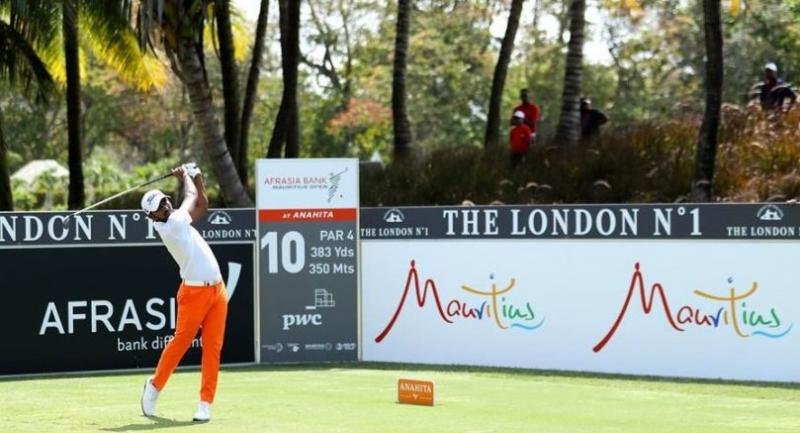 Despite missing out on his breakthrough victory, the 25-year-old Indian took home his career’s biggest prize purse of US$104,364 and jumped a massive 45 spots up to 25th place on the Merit rankings, successfully keeping his card for the 2019 season.

Chikka, who won on his domestic circuit last month, had returned to Mauritius not only with an aim of putting up a fine showing to boost his Merit rankings, but also to seek redemption for himself after failing to qualify for the event last year. He was the first reserve on-site.

His intent certainly did not go unnoticed as he carded a flawless eight-under-par 64 highlighted by eight birdies to grab a share of the opening round lead by one at the picturesque Four Seasons Golf Club, Mauritius at Anahita.

Chikka would finish two shots back of winner Kurt Kitayama of the United States alongside Matthieu Pavon of France with matching totals of 18-under-par 270 in the event, which is tri-sanctioned by the Asian Tour, European Tour and the Sunshine Tour.

“I’ve played to a solid finish, which was much needed. I parred the last hole to save a lot of money which helped boosted my position on the Habitat for Humanity Standings. I’m going to take the positives from last week. I can smile and say that my Asian Tour card is done now.

“I can just go and look for a win now. I’m glad to put myself in a better place (on the Merit list) as compared to last year. I’m going to South Africa and Indonesia with a bigger smile than I had this week,” said Chikka, a double-winner on the Asian Development Tour (ADT).

Asian Tour rookie Kitayama, who came through the Qualifying School earlier in January, sweetened his year with a breakthrough victory after closing with a 68 in what was his debut appearance at the AfrAsia Bank Mauritius Open.

Prior to his win, Kitayama has notched three top-five finishes in New Zealand, Thailand and Japan and did not miss a single cut in 13 starts on the Asian Tour this season. He also claimed his first ADT title in Malaysia in January.

Kitayama’s triumph at the world-renowned holiday isle would also mark his first victory in only his second start on the European Tour since making the grade at the Qualifying School in Europe last month.

“I’m just so proud, really happy. It’s an unbelievable moment for me, I’m just so happy I was able to pull it off. This whole year has been, well, what a great year! I still have two more events on the Asian Tour, but to win on one of the last few events of the year is just great.

“It’s been really exciting for me, being able to travel all over the globe and I’m going to continue to travel more. I’m really looking forward to it,” said the 25-year-old American, who propelled to eighth place on the money list following his victory.

Over in Thailand, Miguel Tabuena of the Philippines made a welcome return to the winner’s circle after closing with a four-under-par 66 to claim a three-shot victory at the Queen’s Cup hosted by Jaidee Foundation on Sunday.

The 24-year-old Filipino ended a three-year title drought after capping a winning total of 20-under-par 260 at the US$500,000 event held at the Legacy Golf Club. He took home a winner’s cheque of US$90,000 to sit in 16th place on the Merit rankings.

“I didn’t expect my second win to take this long. I am really grateful for being able to finally get the job done. I have worked hard over the past few weeks. It means the world to win a tournament hosted by an Asian legend like Thongchai Jaidee. It’s a dream come true to lift this trophy,” said Tabuena.

The top-60 players on the final Asian Tour Habitat for Humanity Standings will earn their playing rights for the 2019 season. India’s Shubhankar Sharma continues to lead with a current haul of US$755,994 while Sanghyun Park of Korea trails by about US$194,000 in second place.

South African Justin Harding, who came in fourth in Mauritius, remained in third position with earnings of US$55,638 while Gaganjeet Bhullar of India and Scott Vincent of Zimbabwe sit in fifth and sixth respectively.

The Tour will head to South Africa for the penultimate South African Open hosted by the City of Johannesburg, which gets underway at the Randpark Golf Club on Thursday.

The 2018 Asian Tour season will culminate with the highly-popular BNI Indonesian Masters which will be held at the Royale Jakarta Golf Club from December 13 to 16 next week.

Top-20 players on the Asian Tour Habitat for Humanity Standings