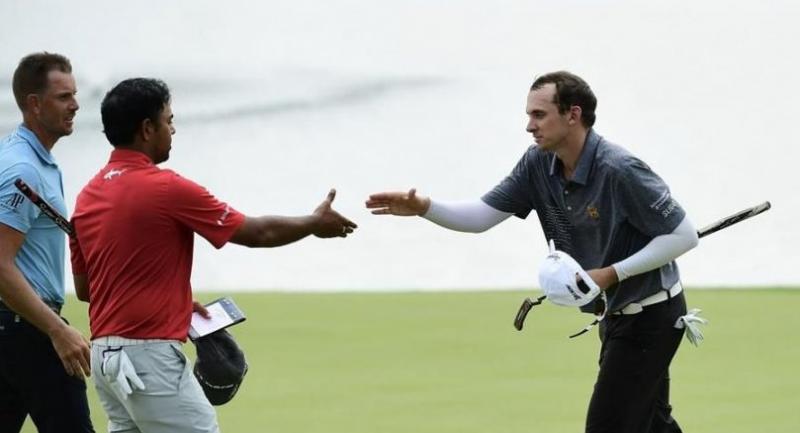 Jakarta -  American John Catlin emerged tops in his marquee pairing by opening with a six-under-par 66 to share the first round clubhouse lead with Qualifying school graduate Sungho Lee of Korea at the BNI Indonesian Masters presented by Bank Tabungan Negara (BTN), PT.Lautan Luas.Tbk and Bank Mandiri on Thursday.

Lightning activities around the Royale Jakarta Golf Club led to the suspension of play at close to 4pm (local time) before officials decided to call off play for round one about an hour later.

62 players including defending champion Justin Rose of England will resume their first round at 6.20am (local time) on Friday morning. Rose is at five-under through 14 holes.

Playing alongside Sweden’s Henrik Stenson and India’s Anirban Lahiri, Catlin showed the form that led him to three Asian Tour wins this season when he marked his card with seven birdies and one bogey to set the early pace at the Asian Tour’s season-ending event.

With only his tied-14th finish in Chinese Taipei as his best result on the Asian Tour this year, Lee is determined to put up a strong showing to end his year on a high at the US$750,000 event.

The 31-year-old Korean is currently in 95th place on the Habitat for Humanity standings and will need a huge lift to finish inside the top-62 and save his Tour card for the 2019 season.

Philippines’ Angelo Que meanwhile returned to familiar surroundings in the best of form after playing in Japan for a large part of this year.

Apart from a bogey-five on 16, the three-time Asian Tour winner showed his commanding form by signing for a 67 to stay one shot back of Catlin and Lee.

Like Que, tournament drawcard Stenson also posted a 67 to put himself in contention in his tournament debut.