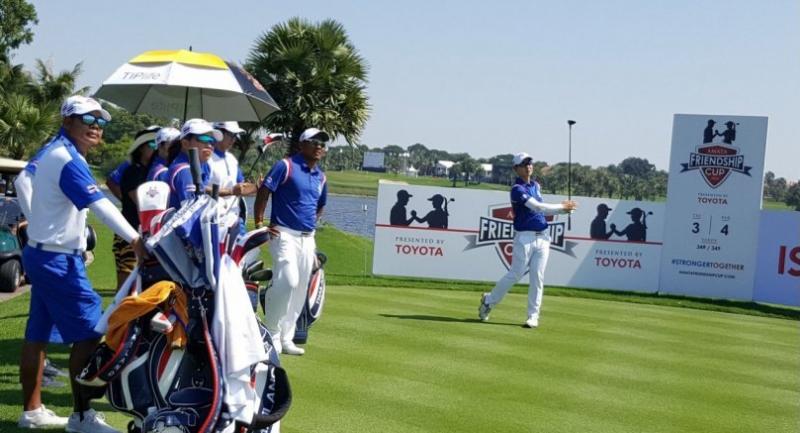 Jazz Janewattananond, right, tees off during a practice round.

Thailand captain Virada Nirapathpongporn mixed up her male and female players during practice yesterday ahead of the inaugural three-day Amata Friendship Cup which starts on Friday.

The mixed-team event sees Thailand taking on Japan, each with six men and women, and will feature an array of the country’s leading players: including LPGA world No1 Ariya Jutanugarn, her sister Moriya, Thai No 3 Pornanong Phatlum and on the men’s side, the first Thai full member on the PGA Tour, Kiradech Aphibarnrat, as well as legends Thongchai Jaidee and Prayad Marksaeng.

The competition will start with the foursomes (of four mixed pairs from each team against each another) in the morning and fourballs (same pattern with foursomes) in the afternoon on Friday and Saturday with the remaining 12 singles matches to be played on Sunday.

The first team to win 14.5 points out of 28 will win the tournament at the Amata Spring Country Club in Chon Buri.

“We will keep mixing our players together in the mornings and afternoons so that they get used to each other,” said Virada, who is work with the Thai men’s captain Boonchu Rungkit against their visiting counterparts Joe Ozaki and Miho Koga.

“At first it was a bit strange for them as they had never practised like that. But at the end of the day, they adjusted to the format and get along with each other well,” added Virada.

World No50 Pornanong said she was excited to be competing in a mixed-team event for the first time.

“I’ve never played foursomes and fourballs alongside the men. I hope to see a lot of fans show up for support this weekend,” said Pornanong, who finished runner-up in the British Women’s Open this year.

Rising star Pannarat Thanapolboonyaras said: “The fairways are wide, which suits my game. I have practised here a few times and got used to the course well.”