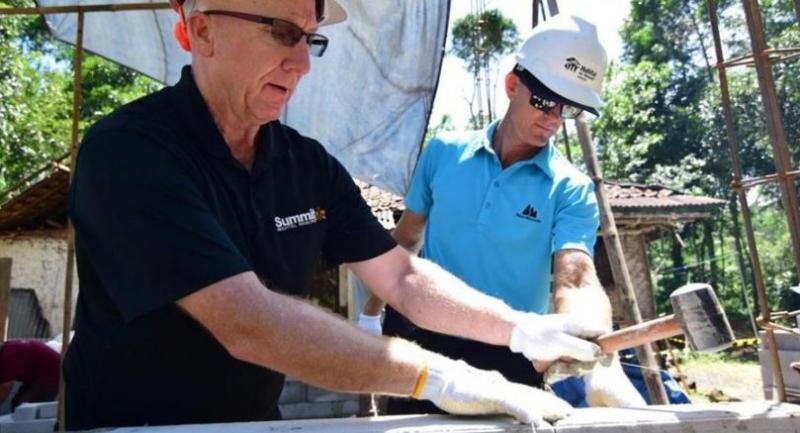 Jakarta -  Celebrating hope, joy and giving, Asian Tour golfers and staff spent a day to volunteer and build homes with Habitat for Humanity Indonesia and future homeowners in Sentul village, Bojong Koneng in Bogor to cap the successful Indonesian Masters.

"It has been a meaningful year for the Asian Tour in 2018. As we celebrate another season of success, we are happy to see that many stakeholders within the Asian Tour family made an effort to give back to society through our partnership with Habitat for Humanity.

Through this partnership, our objective is to help Habitat for Humanity expand their brand awareness by garnering support from the golfing community to provide more families with access to affordable housing.

Over the past 12 months, players and staff have also volunteered their time on-site in India, Thailand and now Indonesia, which are some of the places that we host tournaments in. We are proud to be able to pledge our support to Habitat for Humanity," said Cho Minn Thant, Chief Operating Officer of the Asian Tour.

Rick Hathaway, Asia-Pacific vice president of Habitat for Humanity International said: “We are grateful for the strong partnership with Asian Tour through 2018. The build with Habitat families in Sentul marks Asian Tour’s continuous support. Thanks to the passion and commitment of golfers and staff, we can move closer to our vision of a world where everyone has a decent place to live.”

During the build, Asian Tour volunteers were able to meet and work with future homeowners Enoh, Bai and Aben. Their families have been living in run-down bamboo houses that have leaky roofs and poor lighting. With the support of Habitat Indonesia and Asian Tour, the three families will be able to create a better future through secure and stable homes.

In Sentul, where communities are among the millions of Indonesians living in poverty, low-income housing are built by the families themselves often using makeshift and low-quality materials. Sustainable housing solutions that build families’ and communities’ resilience are critical in disaster-prone Indonesia where vulnerable families are at risk of losing scarce assets and falling deeper into poverty.

Generous contributions from Asian Tour golfers also help make a difference. Habitat ambassadors Danny Masrin and Berry Henson raised funds together with their peers and supporters through the #BirdiesforHabitat challenge at the Indonesian Masters.

As Asian Tour’s sustainable development partner, Habitat for Humanity was able to bring the need for decent housing closer to the hearts of the golfing community in the region and the rest of the world. The partnership is instrumental in raising resources, awareness and in mobilizing volunteers for the cause of decent, secure housing in India, Indonesia, Japan, Korea, New Zealand, the Philippines, Thailand and Vietnam.

Marking its 35th anniversary in the Asia-Pacific region in 2018, Habitat for Humanity continues to draw on the strength of partnerships such as with Asian Tour to build strength, stability and self-reliance through shelter.