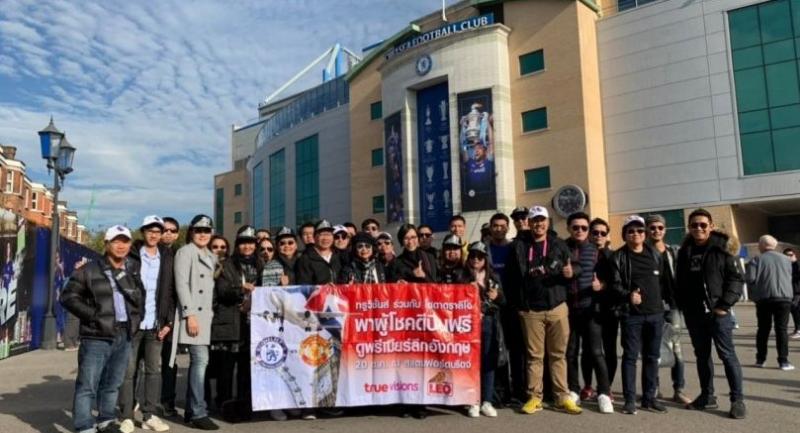 Eight Thais flew in to watch the Premier League (EPL) clash between Chelsea and Manchester United last Saturday – but these were no jet-setting millionaires.

The eight were treated to a thriller as the home team scored a last-gasp equaliser for a 2-2 draw.

They landed the trip after entering TrueVisions’ campaign “Premier League VIP Big Fan” and Leo soda water’s “Leo Super Match”. TrueVisions is the EPL broadcast licence-holder from 2016-2018 while Singha Corp under Leo-maker Boon Rawd has been a global partner of both Chelsea and Manchester United since 2010.

To win the TrueVisions tickets, entrants had to predict who would win the Premier League this year and why.

Tanat Khemthongpradit, a 21-year-old Manchester United fan, was chosen after backing the Red Devils to clinch the title. He believed Jose Mourinho would be able to lead United forward despite the ongoing rift between the manager and his executive board. He’s given up on hopes that the troubled team will claim the title this season, but he wants to see more passion from the players in games.

For Tanat, who is obviously knowledgeable about football, the trip was a dream come true.

“I was stunned after I heard I’d been picked as a winner. I have been dreaming since I was young of coming to England to watch my beloved team play,” he said.

Natchapon Phansawat, a Chelsea fan, won his ticket by offering his opinion that the Blues were constantly changing their tactics which kept things exciting for fans.

This wasn’t his first visit to a stadium for a match but it was his first time watching a big-name team play.

“I’m really glad to get my first taste of what it’s like to be among 41,000 fans at Stamford Bridge stadium,” he said.

Kittima Ratanasangsathien, assistant director of marketing communication TrueVisions Group, said both companies wanted to offer fans the chance to watch matches not just on television but at the stadium.

Vicharn Nimitvanich, special force department manager at Boon Rawd Trading, said his company was determined to go on supporting sport at the domestic and international levels and hoped to offer more special activities for Thai fans in the future.