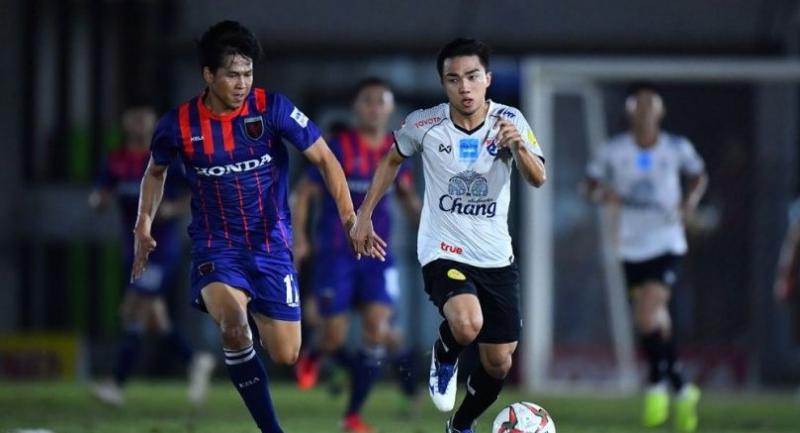 Chanathip Songkrasin, right, during a warm-up game with Thai Honda FC on Wednesday.

Thailand coach Milovan Rajevac has revealed his 23-man squad for next week’s Asian Cup and included five strikers, with both the experienced Teerasil Dangda and rising star Supachai Jaided making the final cut.

The only surprise is a recall for PT Prachuab striker Siroch Chatthong, who was not even recruited for the recently concluded AFF Suzuki Cup after a poor return of three goals in 24 national appearances stretching back to 2016.

The three musketeers – Teerasil, Theerathon Bunmathan and 2018 Thai FA Player of the Year winner Chanathip Songkrasin – have all been selected for the tournament which takes place in the United Arab Emirates from January 5 to February 1.

The Thai challenge will be spearheaded by 30-year-old Teerasil, who has scored an impressive 42 goals in 95 Thailand games.

Supachai, 20, who has three goals from just eight caps, will vie for a start with his idol Teerasil plus three other strikers –Adisak Kraisorn, Chananan Pombuppha and Siroch.

It’ll be Thailand’s first appearance in the Asian Cup finals in 12 years; the War Elephants will have their last warm-up game against Oman on January 5 before launching their Cup campaign against India on January 6 at the Al Nahyan Stadium in Abu Dhabi (8.30pm Thailand time).

Their second game follows four days later against Bahrain at the Al-Maktoum Stadium in Dubai (6pm) and the final group game with the UAE on January 14 (11pm).

The 23-man Thailand squad is: