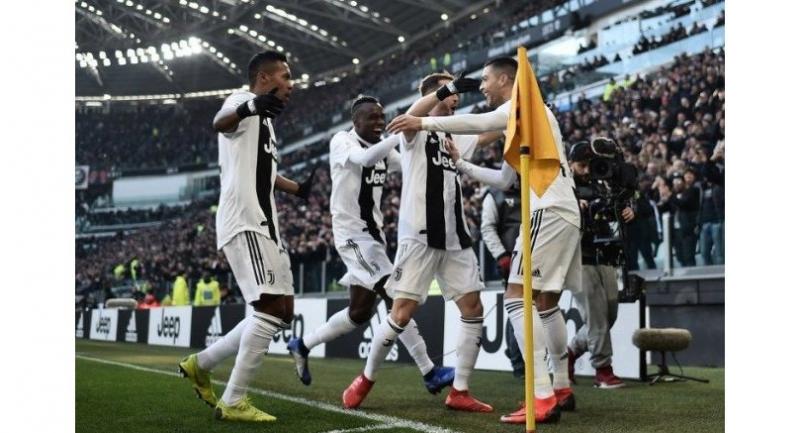 Juventus' Portuguese forward Cristiano Ronaldo (R) celebrates with teammates after opening the scoring during the Italian Serie A football match Juventus vs Sampdoria on December 29, 2018 at the Juventus stadium in Turin. Marco BERTORELLO / AFP

Cristiano Ronaldo scored twice as Juventus closed out 2018 on a high with a 2-1 win over Sampdoria to set a new points record in Serie A before the winter break on Saturday.

Not to be outdone, however, Napoli's Arkadiusz Milik also bagged a brace with a 3-2 home win against Bologna to keep the pressure on the champions.

Ronaldo-powered Juventus have achieved a record number of points before the three-week winter break with 53 from 19 games.

Napoli are nine points behind in second, with Inter Milan a further five adrift in third, days after their clash at the San Siro was overshadowed by the death of a supporter with Napoli defender Kalidou Koulibaly targetted by racist chanting.

Koulibaly was suspended for Saturday's game but fans showed their support in his San Paolo stadium by wearing masks with the defender's face and holding up banners saying: "We are all Koulibaly".

Dries Mertens sealed victory two minutes from time after Bologna battled back twice to level Milik's goals on 15 and 51 minutes.

"It was important to end the year on a high and it wasn't at all easy," said Juventus coach Massimiliano Allegri after a game in which the video assistant referee played a key role.

Two penalties were decided by VAR with Sampordia also having a late equaliser ruled out.

Ronaldo curled in the opener after just two minutes in Turin, adding a second from the spot on 65 minutes, to go top of Serie A's scoring charts on 14 goals.

Fabio Quagliarella pulled the Genoa outfit level with a penalty on 33 minutes, before Riccardo Saponara's late equaliser was ruled offside.

Sampdoria coach Marco Giampaolo, dismissing Ronaldo's penalty as "a gift," adding "that Saponara goal should never have been cancelled".

The seven-time reigning champions have dropped points just twice, against Genoa in October and Atalanta midweek, and are firmly on track for an eighth consecutive Scudetto.

"Records are meaningless, if not to improve and raise the bar," said Allegri.

"We do have the perception that with Cristiano Ronaldo there's a better chance of winning the Champions League. However, we're not even in January yet and there's a very long way to go.”

The Portuguese striker found a way through early, picking up a Paulo Dybala cross to fire in past Sampdoria's on-loan Juventus goalkeeper Emil Audero.

The 35-year-old became the first player to score in nine consecutive Serie A games since David Trezeguet for Juventus in 2005.

Audero deflected over a Ronaldo header on the hour but the hosts went ahead when the referee pointed to the spot for an Alex Ferrari handball.

Substitute Saponara looked to have grabbed a point deep into injury time but VAR ruled he was in an offside position.

Napoli got back to winning ways after last week's defeat in Milan, despite missing Koulibaly and Lorenzo Insigne, who were both suspended, and injured captain Marek Hamsik.

Bologna's Federico Santander and Danilo levelled twice with headers before Mertens secured the win with a powerful drive from a distance.

"We had some good results that have only been watered down by an extraordinary Juventus run."

Earlier Inter Milan earned back-to-back wins with Senegalese winger Keita Balde scoring on 72 minutes in a game played without their fans after the racist abuse aimed at Koulibaly in the San Siro.

Roma profitted from Sampdoria's defeat to move up to sixth just two points off the Champions League places, thanks to second half goals for Bryan Cristante (58) and Cengiz Under (75) in a 2-0 win over Parma.

Lazio were held 1-1 by Torino in the Stadio Olimpico, as Atalanta beat Sassuolo 6-2 with Slovenian Josip Ilicic scoring a second-half hat-trick.

At the San Siro, Argentine forward Gonzalo Higuain got back scoring after a two-month drought firing in the winner in a 2-1 victory for AC Milan over struggling SPAL.

Gennaro Gattuso's side move up to fifth, one point behind Lazio, to end their four-game winless run.