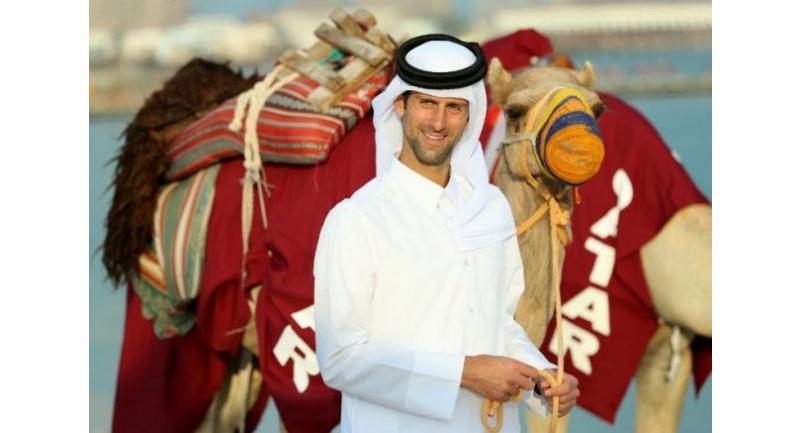 Novak Djokovic dressed in a traditional Arab costume and standing next to a camel in Doha on December 30, 2018, one day before the ATP Qatar Open.

Despite a combination of age, injury and long-held prediction of a new generation of stars about to burst through, Djokovic insisted the four veterans remained the players to beat.

"I think if we are healthy and playing well, the four guys still have probably the best chance to always win Slams," said Djokovic in Doha, ahead of playing in his season-opener, the Qatar Open.

Djokovic is the favourite to dominate in 2019, having finished last season so strongly, overcoming an injury-hit start to the year to claim the Wimbledon and US Open titles.

The 31-year-old also rose from world number 22 to number one, becoming the oldest ever player to finish the year as the highest ranked player in the world.

His rivals, especially Nadal and Murray, are still battling back to full fitness, increasing the chances that the Serbian could add to his 14 Grand Slam titles.

One more major win and he will overtake Pete Sampras to become third on the all-time list of Grand Slam winners. Only Federer (20) and Nadal (17) have more.

Since and including 2010, the "Big Four" have won 32 Grand Slams between them, with Djokovic top of that list with 13 of his titles coming in the current decade.

Djokovic though insisted that "the next generation is already there" and singled out Germany's world number four Alexander Zverev, Croatia's Borna Coric, number 12 and Greece's number 15 Stefano Tsitsipas as the main threats.

"It's a matter of time when we will see some of them competing in the last stages of Grand Slams," he added.

Another of those who might challenge the usual suspects is Austria's Dominic Thiem, who is also in Doha, and the number two seed after the Serb.

The world number eight admitted it was time for the next generation to step up.

"All the guys who won Slams in previous years are on tour, so it will be very tough," Thiem said.

"Yes, there are four chances for us... and we are very pumped to take one Grand Slam and maybe it is going to happen this year."

He begins his quest for a third Doha singles title on Tuesday against Damir Dzumhur of Bosnia and Herzegovina.

In Doha, his main challenge is likely to come from Thiem and Karen Khachanov who ended Djokovic's 22-match winning streak in November.

On Monday, there were wins for Thomas Berdych, the Czech beating Germany's Philipp Kohlschreiber 6-4, 7-6 (7/5) and Russia's Andrey Rublev against Italy's Andreas Seppi, 7-5, 6-1.