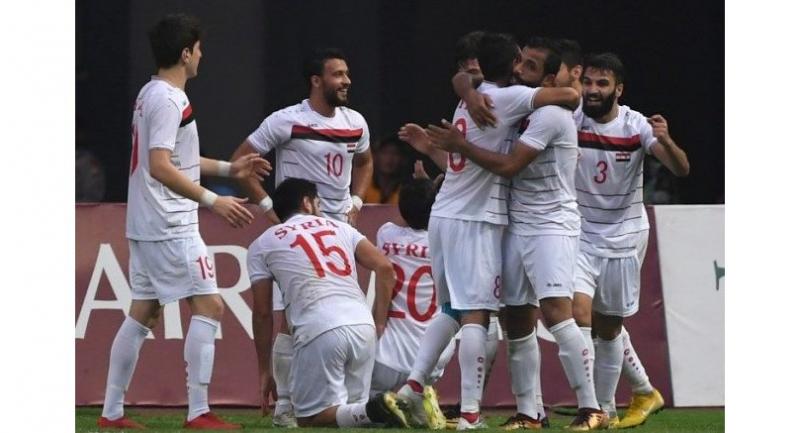 Syria take the field this weekend for their first international football tournament in eight years of war, but not all fans are happy.

The Qasioun Eagles take on Palestine on Sunday in their first game of the Asian Cup group stage, hoping to make up for the heartbreak of narrowly missing out on the World Cup finals in Russia last year.

Their qualification has thrilled Syrians in government-held territory, but angered fans in rebel areas who accuse the national team of playing for a regime they detest.

After last year's disappointment, national team member Muayyad Ajaan said he was determined this time would be different.

"The pressures and the pains of war have had a positive impact on our spirits. We're determined to make the Syrian people happy," he told AFP.

"Our qualification is a victory for everyone."

The team's participation in the Asian Cup has particular significance as Syria remains banned from hosting international fixtures.

Maria Barud, 29, who works at a clothes store in Damascus, said she and others were in desperate need of some joy after gruelling years of war.

"I never thought a day would come when I remembered the name of a football player, but I've remembered all the names of players in the Syrian team," she said.

"I follow what matches are when, and even bought the team shirt."

After years of devastating conflict that has killed 360,000 people and displaced millions, the regime today is back in control of two-thirds of the country.

"I no longer see it as just a rough boys' game. It's become a sensitive national topic," Barud said.

"We dance when the team wins, and cry when it loses."

Syria reached an advanced stage in qualifications for the 2018 World Cup, only to be denied at the last hurdle with a defeat to Australia.

Syria will face the Socceroos again in the group stage of the Asian Cup, as well as vying with Palestine and Jordan for a place in the knock-out phase.

In the stands, supporters held up their mobile phones to film or snap pictures of the players, under posters of President Bashar al-Assad and his father Hafez.

But not all Syrians are so enthusiastic.

In areas that escape regime control, football fans are damning of a team they say only represents the government.

"The team doesn't represent me in any way whatsoever," said Rami Mohammed, a resident of the northern rebel-held town of Azaz.

"How am I supposed to cheer on players who support a murderer?" the 23-year-old asked.

After a series of Russia-backed regime victories around the country, many Syrians have fled their homes to territory still under opposition control in the north of the country.

Yunes Shasho, who also lives in Azaz, says he could not support the national team.

There are "players still in regime jails, while their colleagues play under the picture of Bashar al-Assad," said the 31-year-old.

Throughout the conflict, several players have distanced themselves from the team -- but some have since returned.

Assad met national players in October after the World Cup qualifiers, posing for photographs with them and signing their red-and-white team shirts.

The squad included Firas al-Khatib, who had previously voiced support for the rebellion, although he will be absent from the Asian Cup due to an injury.

Syria's team for now will focus on surviving as a long as possible in the newly expanded Asian Cup, which includes 24 instead of 16 teams this year.

The Qasioun Eagles, named after a mount overlooking Damascus, will face Palestine in their first game on Sunday.

Goalkeeper Ibrahim Alma said he and his teammates were determined  to do well.

"People need to come together" despite the war, he said.

Mohammed Barafi, a computer shop employee in Damascus, said he was excited.

"This team is the best Syria has produced, because it is born of the crisis and its sufferings," he said, referring to the war.

"For the players, the match will not just be a game," said the 24-year-old.