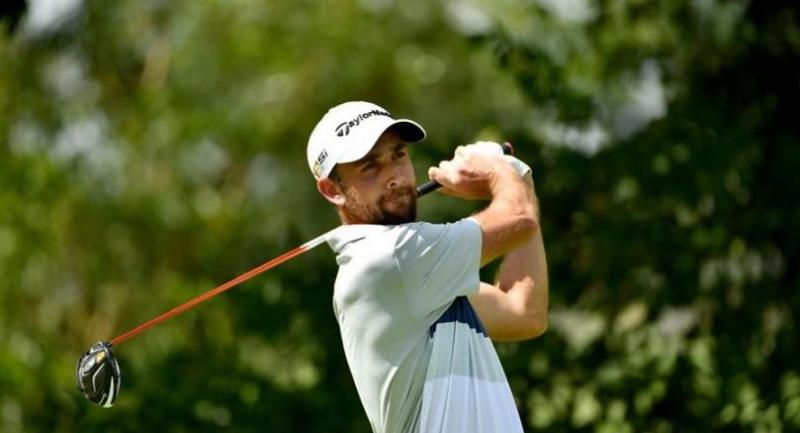 Red-hot Steve Lewton of England shot a stunning nine-under-par 62 to grab a one-stroke lead over local hope Jazz Janetwannanond at the halfway stage of the Boonchu Ruangkit Championship at the Rancho Charvee Resort and Country Club in Korat on Friday.

The 25-year-old shot seven birdies and an eagle to lead on 16-under-par-126 in the Asian Development Tour season opener, which offers a minimum of six world ranking points for the winner.

Lewton, winner of the 2014 Mercuries Taiwan Masters, an Asian Tour event, is in the hunt for his first win in two years since winning a Philippines Golf Tour title in 2017.

Jazz also had another fantastic day, carding a 64, while while compatriots Itthipat Buranatanyarat (64), Kosuke Hamamoto (65) and Finland’s Janne Kaske (66) share third place on 130.  Thai No 1 Kiradech Aphibarnrat was eight off the pace after a 69.

“It was a really great round today. I hit it a lot better and closer than yesterday on a lot of holes but I missed some chances on the front nine. I changed my swing when I was back home and it seems to be working a lot better,” said Lewton.

The one-time Asian Tour winner grabbed birdies on holes three, six, 10 and 11 before chipping in from 20 yards for an eagle. He nailed birdies on 14, 15 and 16 to take his place atop the leaderboard.

“I hit a good drive down the middle and had about 260 yards to the pin. Then I hit my three-wood dead straight and just chipped in from 20 yards for my eagle.

“My short game was really good but I think my driver was the best part of my game today. I only missed two fairways all day and made 16 greens,” added Lewton.

Taking advantage of his course knowledge from when he played the event in 2017, the Englishman was rewarded for his aggressive approach.

“Having played here in 2017, I came into this week a lot more prepared because I knew I could be more aggressive on some holes. On some tee shots I could take 50 yards off if I took the corners and got the right line,” added Lewton.

Jazz had his sharp-shooting iron-play to thank for despite struggling on the greens today. He only missed two greens but totalled 30 putts in his second consecutive bogey-free round.

“Everything was on par today. It was the same as yesterday, a really solid round. I just couldn’t get putts to roll in,” said Jazz, who lost in a play-off in 2016 and settled for second place.

“Really striking it well since I made those changes to my swing last year. My longest putt was about 15-feet today. (About the eagle) I played that hole early in the morning so there wasn’t much wind. I hit my approach to about three-feet and tapped that in for eagle,” said the 23-year-old.

Two-time ADT winner Itthipat stole the thunder with a fantastic ace on hole seven from 154-yards with his pitching wedge.

“This is my fourth hole-in-one! I stepped up to the tee and hit a perfect pitching wedge straight at the pin, it took a backspin and went right in. That was definitely the highlight of my round,” said the Thai.

Kaske, a two-time ADT winner, was disappointed with his driver which he admits is usually his strongest part of his game. He made up for it with a hot putter where he only navigated around the course in 27 putts.

“Putting and my iron play helped me a lot today. There is something wrong with my driver, it just didn’t feel right at all. I noticed it on the range and I knew something was off. So, I need to get that fixed going into the next two rounds because that’s usually the strongest part of my game,” said Kaske.

The halfway cut was set at five-under-par 137 with 62 players advancing into the weekend rounds. Defending Champion Namchok Tantipokhakul signed for a 65 to sit in tied-13th on a 133 total.

The Boonchu Ruangkit Championship which is jointly sanctioned by the All Thailand Golf Tour (ATGT), is celebrating its fifth edition this year where the winner is projected to earn 10 Official World Golf Ranking (OWGR) points.

The leading seven players on the ADT Order of Merit at the end of the season will earn playing rights on the premier Asian Tour for the 2020 season.

Official World Golf Ranking (OWGR) points are offered on all ADT events with the winner earning a minimum of six OWGR points while the top-six players and ties earn points on a sliding scale.