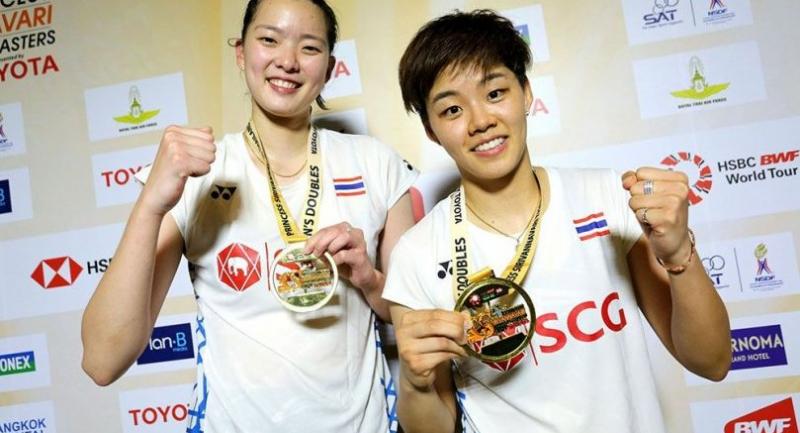 Sapsiree and Dechapol Puavaranukroh, ranked world No 5 in mixed doubles, had to settle for silver for a second time here at the Hua Mark Indoor Stadium, going down to top seeds and defending champions Chan Peng Soon and Goh Liu Ying of Malaysia 21-16 21-15. Dechapol has lost in the final for three successive years, teaming with Puttita Supajirakul 12 months ago when Sapsiree was recovering from a knee injury.

Sapsiree however redeemed her pride later yesterday in the women’s doubles when she and Puttita upended fifth seeds Li Wenmei and Zheng Yu of China 15-21 21-15 21-10 for their second title, after winning the Thailand Open in 2016.

“I didn’t go for my shots in the mixed doubles. I hope that one day I will finally win with Dechapol,” said Sapsiree. “But coming back to win the women’s doubles is compensation. I’m tired but the victory made me feel so good.”

Puttita, a Chulalongkorn University graduate, said she and Sapsiree had to dig deep to beat the Chinese duo, ranked 60th in the world.

“We’ve never played them before, so it took a while to adjust to their style. ... It’s amazing feeling to win together again,” said the towering Puttita (183cm) in her third comeback tournament with Sapsiree. Malaysia also reigned supreme in men’s doubles when top seeds Goh V Shem and Tan Wee Kiong trounced fifth-seeded Lu Ching Yao and Yang Po Han of Taiwan 21-13 21-17. It was their first title together in two years after they won the Super Series Finals in Dubai in December 2016. In the biggest shock of the tournament, unfancied qualifier Kean Yew Loh of Malaysia came from behind in both games to stun top seed and two-time Olympic champion Lin Dan of China 21-19 21-18 for the biggest victory of his career.

“I watched him play when I was young. It was an honour to play and finally beat him,” said the 21-year-old, who’s just back from serving two years as a military conscript.

"Before the tournament started, I didn't expect to win. I just played round by round. It just happened," added the Singaporean who wishes to follow the footstep of his idol Lin.

“Since I was young, my goal has always been the Olympic gold medal. I will continue to work towards it,” he added.