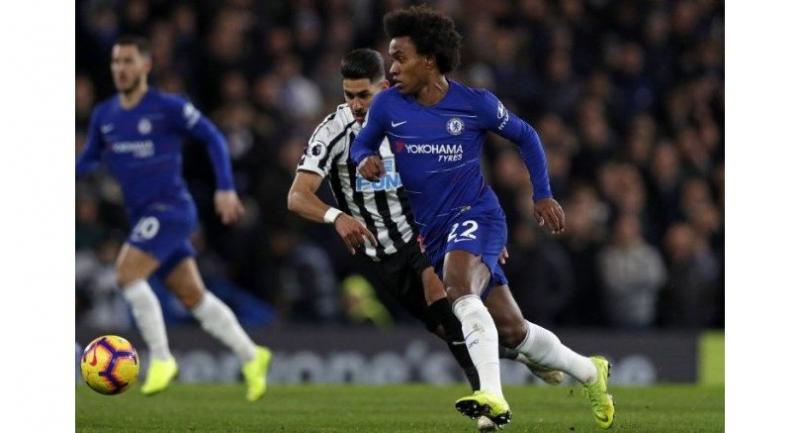 The need for the riches as much as the prestige of a return to Champions League football leaves Arsenal little room for error when Chelsea visit the Emirates on Saturday.

A run of three defeats in their last six Premier League games has left the fifth-placed Gunners six points adrift of their London rivals in the battle for a top-four finish.

However, it is Chelsea and not Arsenal who are reinforcing in the January transfer window to ensure they are not forced to cope with the consolation prize of the Europa League for a second consecutive season.

Chelsea boss Maurizio Sarri seems set to finally get the striker he wanted in Gonzalo Higuain on a loan deal from Juventus having worked with the Argentine international during a prolific 38-goal season at Napoli in 2015/16.

Arsenal's problems are at the other end of the field. No side in the top half of the table have conceded more than the 32 goals Unai Emery's men have in 22 Premier League games.

However, Emery has revealed that Arsenal do not have the funds to make signings this month unless they are on loan.

Arsenal ranked sixth in Deloitte's latest Football Money League ahead of the likes of Paris Saint-Germain, Chelsea and Liverpool with a near 500-million-euro ($570 million) income.

However, while Premier League leaders Liverpool spent big on marquee signings Alisson Becker and Virgil van Dijk to transform their defensive record, Arsenal are paying a heavy price for a series of costly contracts and an imbalanced squad.

The club's highest earner Mesut Ozil penned a new three-and-a-half contract worth a reported £350,000 ($450,000) a week last January as Arsenal feared losing one of their prized assets for free.

Just days earlier to get some return for Alexis Sanchez, who also wound his contract down into its final months, Arsenal agreed an exchange deal to sign Henrikh Mkhitaryan from Manchester United on a deal worth a reported £200,000 a week until 2021.

However, neither player can count on the confidence of Emery. The two creative midfielders have started together just four times in the league this season and Ozil was dropped from the squad entirely for last weekend's defeat at West Ham.

The deadline-day signing of Pierre-Emerick Aubameyang last January has proved far more successful. The Gabon international is tied with Mohamed Salah and Harry Kane as the Premier League's top scorer with 14 goals this season.

But the £56 million paid for Aubameyang broke a club-record transfer fee set by the signing of another striker Alexandre Lacazette just six months earlier.

Emery has also struggled to get both into his starting line-up with Lacazette growing increasingly frustrated at playing second fiddle.

With so much spent on strengthening the forward areas, a limited budget when looking for a new goalkeeper in Bernd Leno and ageing defenders Sokratis Papastathopoulos and Stephan Lichtsteiner in the summer has been exposed.

To make matters worse, head of recruitment Seven Mislintat, the man hired to get Arsenal better value in the transfer market just 14 months ago due to a sterling reputation earned at Dortmund, is reportedly set to leave the club after recently seeing his influence diminished.

The one obvious way to ease the economic strain is a return to the Champions League after a two-year absence, making victory this weekend imperative.

"We have time to achieve that this season," insisted Emery this week, but the Spaniard believes he will be afforded time given the restraints put upon him.

"We knew there were going to be difficulties in this process. The most important thing is to be aware that the difficulties will come, and at that moment still be able to make progress.

"That is the idea. The idea is to get Arsenal back to where the club deserves to be, but it needs time."