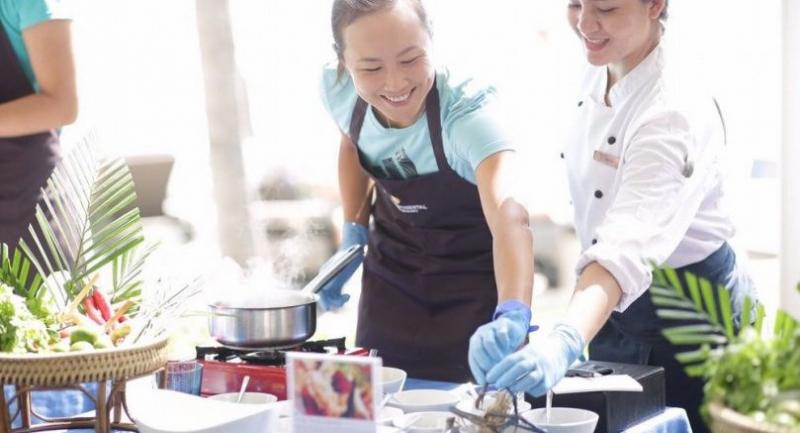 Former world No 1 doubles Peng Shuai of China, left, during her cooking lesson in Hua Hin.

Two-time Grand Slam champion Peng Shuai of China had a Thai cooking lesson ahead of her participation in the US$250,000 WTA Thailand Open, which starts on Monday in Hua Hin. The former world No 14, winner of the 2013 Wimbledon and 2014 French Open women’s doubles, both with Hsieh Su-wei of Taiwan, will be among the high-profile players featuring at the True Arena.

As an appetiser before her on-court commitment Peng was taught how to make “Tom Yum Koong” (Spicy Prawn Soup) cooking class with the renowned Amporn Chueng-ngam, who made her name in the TV programme “Iron Chef”.

“I love Thai food. It’s so nice to have a chance to cook some,” said the former world doubles world No 1, who had fellow Chinese players Duan Yingying and Wang Yafan as classmates.

It will be Thailand’s 1st WTA event since the Pattaya Open in 2015. Others in action include two-time Grand Slam champion and world No 18 Garbine Muguruza of Spain, the top seed, plus Frenchwoman Caroline Garcia, the world No 19. The 25-year-old Muguruza, winner of the French Open in 2016 and Wimbledon  in 2017, arrived in Bangkok on Thursday evening – it is her second time in Thailand after she lost in the first round in Pattaya five years ago to Kimiko Date Krumm of Japan.

The Spaniard, who reached world No 1 in September 2017, hopes to continue her impressive form after reaching the fourth round at the Australian Open, where she lost to Czech Karolina Pliskova 6-3 6-1.

“I am going into this tournament well prepared, like all other tournaments, and I hope to do well,” said the sixth-time WTA winner, who said she was longing to taste a locally made Pad Thai (Thai fried noodles), her favourite dish.

Also committed to play is the 27th-ranked Su-wei Hsieh, the unorthodox Taiwanese who has double-handed groundstrokes on both sides.

The 33-year-old former doubles world No 1 is a leading contender in Hua Hin, where she reached the final in 2017, losing to Belinda Bencic of Switzerland.

Thai No 1 Luksika Kumkhum is the only home player with direct entry into the main draw. The world No 67 needs to regain her form after two first-round exits in her last two tournaments, in Shenzhen and Melbourne.