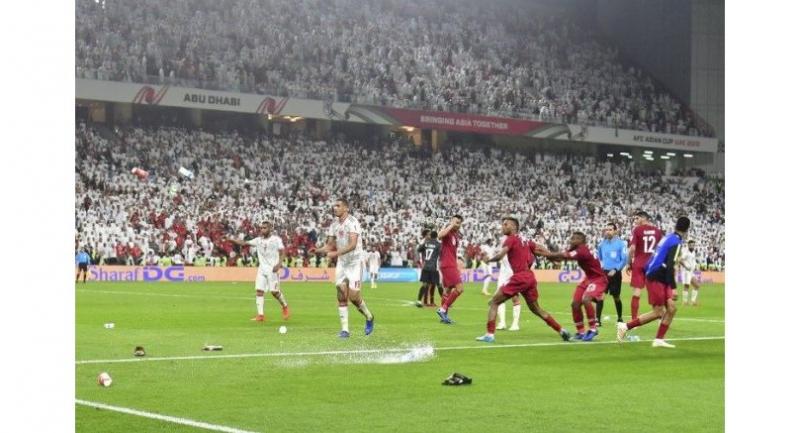 Fans throw bottles and flip-flops at the pitch during the 2019 AFC Asian Cup semi-final football match between Qatar and UAE at the Mohammed Bin Zayed Stadium in Abu Dhabi on January 29, 2019. AFP

The Qataris, whose national anthem was drowned out by boos before the game, face Japan in Friday's final after goals from Boualem Khoukhi, Almoez Ali, Hasan Al-Haydos and Hamid Ismaeil sealed victory for the 2022 World Cup hosts in Abu Dhabi.

As they celebrated a famous win and record sixth clean sheet at a single Asian Cup, plastic bottles rained down from angry local fans -- as they had for each Qatari goal, with midfielder Salem Al-Hajri even hit on the head after their third.

"It wasn't an easy situation," admitted Qatar coach Felix Sanchez. "The players were aware there was going to be a lot of pressure but they managed their emotions quite well -- I'm very proud of them."

A match bristling with regional tension over the long-standing Gulf blockade of Qatar quickly burst into life as a meaty tackle from Bandar Al-Ahbabi on Akram Afif put the Qatari midfielder up in the air.

But Qatar drew first blood after 21 minutes when Khoukhi's shot squirted under UAE goalkeeper Khalid Eisa, to the horror of a hostile crowd of 38,000.

Afif was then targeted by bottle-throwing Emirati fans as he tried to take a corner, appealing desperately to the referee as he stepped away from the kick.

Qatar exacted swift retribution eight minutes before the break, however, Ali smashing home a right-footed shot from the edge of the box to equal Ali Daei's 1996 record of eight goals in a single Asian Cup.

As the Sudan-born striker celebrated, more bottles and even shoes -- a deeply insulting provocation in Arab culture, as former US president George W. Bush famously discovered on a visit to Baghdad in 2008 -- were flung at the players.

A half-time entertainer sang "Let's bring Asia together" but there was little harmony in evidence as the crowd -- boosted by mass give-aways exclusively to locals -- continued to hurl abuse at the Qataris.

UAE almost pulled a goal back after the interval when Ali Mabkhout forced Saad Al-Sheeb into a fingertip save before Ahmed Khalil also tested Al-Sheeb's reflexes.

But Qatar never looked seriously troubled and captain Al-Haydos coolly chipped in a third to spark further chaos as the atmosphere began to turn sinister, Al-Hajri knocked to the ground as more missiles streamed onto the pitch.

Defender Ismail Ahmed was then shown a red card in stoppage time for an elbow on Al-Hajri, before Ismaeil added a breakaway fourth to compound UAE's misery.

"Everybody knows about the problems but we don't care -- we just play football. Let the people talk, winning 4-0 is more important."

UAE coach Alberto Zaccheroni confirmed after the game that he was stepping down.

"I apologise to the leadership of the country," said the Italian, who steered Japan to the title in 2011.

"I don't think the sensitivity of the fixture had any impact on the result. We simply failed in our objective."