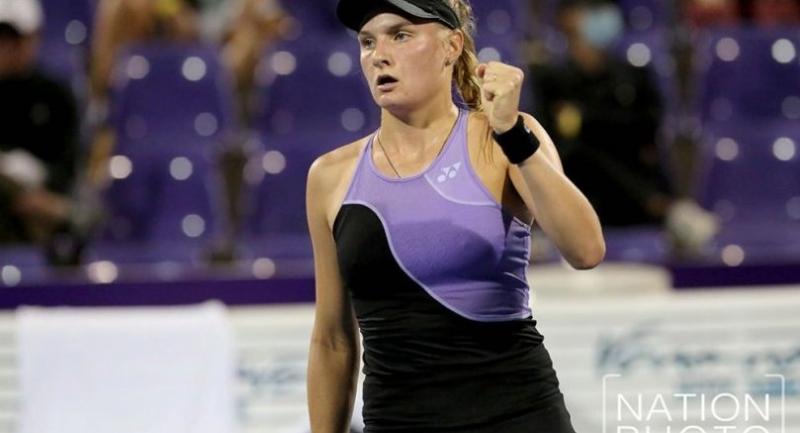 Hua Hin – Up-and-coming Dayana Yastremska of Ukraine underlined her supremacy over former world No 1  Garbine Muguruza of Spain as she overpowered the top seed 7-6 (7-5) 6-1 in the quarter-finals of the US$250,000 WTA Thailand Open at True Arena on Friday.

The 18-year-old player who beat the world No 15 6-2 6-3 in round two in Luxembourg last year bombarded the two-time Major winner with heavy shots from both wings while Muguruza was overwhelmed with unforced errors before losing in one hour and 40 minutes.

“I forgot about what happened last year as this is a different match. I watched highlights (Muguruza’s matches) to see how she played. Although I’m confident but it was last year. I had to concentrate,” said the teenager who won a WTA title in Hong Kong last year. Yastremska had the first two set points at 6-5 in the first set but squandered them away with two forehand errors which allowed the Spaniard to hold and force the tie-break. The teenager jumped to a 6-1 lead but she needed her sixth set point to land the 68 minute opener after Muguruza netted a forehand. The former world No 1 smashed her racquet on the court in frustration and received a racquet abuse violation  from the umpire.

The Ukrainian took full charge in the second set with her unrelenting groundstrokes while the Spaniard let a barrage of unforced errors creep out of her racquet. The match was over when Muguruza overhit a forehand long.

The 47th ranked Yastremska will play Magda Linette of Poland, No 98 in the world, who sent packing the last Chinese player in the singles maindraw Wang Yafan 6-2 6-3 in one hour and 42 minutes.

“I felt so tired and need to recover from my next match. I will have to watch her game to see how she plays,” she added.

Earlier in the day sixth-seeded Ajla Tomljanovic of Australia shrugged off a brief bout of nerves in the mid second set to oust Chinese fourth-seeded Saisai Zheng of China 6-1 6-3 to reach the semi-finals.

The world No 49 will play Tamara Zidansek of Slovenia who needed up to six match points to outlast Victorija Golubic of Switzerland 4-6 6-1 6-2  in two hours and 10 minutes.