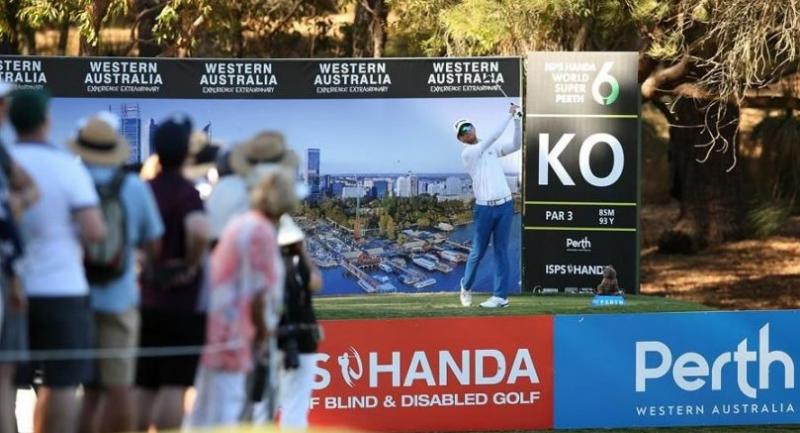 Perth - Despite missing out on yet another opportunity for his maiden Asian Tour win, Scott Vincent of Zimbabwe took pride in his fourth-place finish at the ISPS HANDA World Super 6 Perth on Sunday, which was his best outing in the innovative event.

The 26-year-old Vincent was amongst the 10 players fighting for nine spots following the 54-hole stroke play at the Lake Karrinyup Country Club on Saturday but a par on the first play-off hole confirmed his place as one of the top-24 players for the six-hole Knockout Match Play.

He went on to defeat Australian Wade Ormsby 3&2 in the first round and beat Japan’s Yuta Ikeda 2 UP in the second before progressing into the Quarter-finals after he triumphed against Ben Campbell of New Zealand on the second Knockout hole.

Vincent eventually lost to Spaniard Adrian Otaegui 3&2 in the semi-finals and was left to battle for third place against Paul Dunne of Ireland in the event tri-sanctioned by the Asian Tour, European Tour and the ISPS HANDA PGA Tour of Australasia.

Despite nailing a 35-footer on the fifth and winning the sixth to take the duel to the extra hole, Vincent had to concede defeat after a wayward tee shot into the grandstand saw him leave the way clear for Dunne, who made a short putt to claim third.

Vincent, who had his wife Kelsey on his bag, took home a prize purse of US$54,875 and moved up 14 rungs to second place on the Asian Tour Habitat for Humanity Standings.

“I had my chances but just didn’t take advantage of them. That’s what happens at match play. I didn’t expect to get this far. Obviously, there was a chance but the fact that I made it into the semi-final was pretty good,” said Vincent, the first Zimbabwean to play on Tour.

“I will keep building from there and get better,” added Vincent, who featured in the Match Play stage for the first time in three appearances at the ISPS HANDA World Super 6 Perth.

Vincent’s career has been on a rise since coming through the Qualifying School in 2016. He did not miss a single cut in six tournaments that year and in 2017, he notched three top-three results to finish in 17th place on the Merit rankings to retain his playing rights.

Vincent went on to cap a career-best season yet on the region’s premier Tour in 2018 where he came in fifth on the Habitat for Humanity Standings, thanks to nine top-10 results – the most number of top-10s made by a player without a win last season.

Thailand’s Jazz Janewattananond, who won the season-opener in Singapore last month, continued his reign atop the Habitat for Humanity Standings following his tied-13th place finish, which increased his total earnings to US$197,230.

Jazz, a three-time Asian Tour winner, went the distance with eventual winner Ryan Fox in the second round of the Match Play before getting knocked out by the New Zealander on the third Knockout hole.

“I really felt I had it in my hand already and someone just slapped it away. I felt I got really close and I felt that if I had beaten Ryan Fox, I would have gone on to do better in the next one. But I guess you just have to accept it and move on.

“I’ll be heading to New Zealand next and I’ll work on the things that I fell short in this week. Hopefully I can lift myself up there and perform again,” said the 23-year-old Jazz.

Top players on the Asian Tour Habitat for Humanity Standings