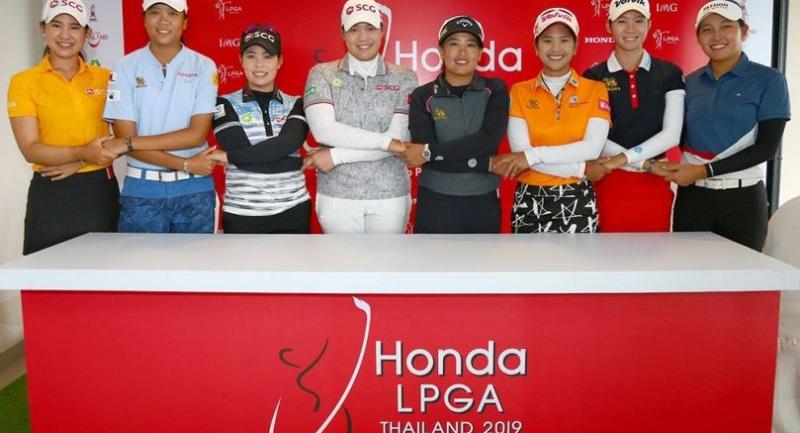 Pattaya -  Local contenders denied that they have home pressure and tended to have better results overseas as they tee off this morning in the US$1.6 million Honda LPGA Thailand at the Siam Country Club Pattaya Old Course. Over the past 13 years, no Thai has ever lifted the trophy in their home LPGA event, the best finishers being Ariya Jutanugarn and her sister Moriya, who were runners-up in 2013 and last year respectively.

All 12 LPGA victories by Thais – 10 by Ariya and one each by Moriya and Thidapa Suwannapura – occurred offshore, raising suspicion that they feel less pressured away from home.

They however denied that theory, saying several factors played significant roles in whether they achieved tournament success.

“We have to compete every week and each week is different,” said Moriya, who won her maiden title, the LA Open, last April.

“They are so many elements coming together for a player to win each week,” added Moriya, who hit 21 under-par last year to be tied for second with Lexi Thompson of the US. “The weather conditions and the courses change every week. We are all determined to play well here and everywhere else. And last year we had several Thais finishing in the top 10 in this tournament.

In fact three local contestants made the top 10 in 2018 which was the best by Thais to date. Ariya signed off at tied fifth while Pornanong Phatlum also made her first top 10 finish in the event at tied seventh. “We enjoy it when a huge number of crowd showed up for support. We have only one LPGA event a year in Thailand while so many LPGA events take place elsewhere. It’s not a surprise we have better results there,” said the 29-year-old Pornanong, who has yet to win an LPGA title, despite joining the tour before other Thais. She also finished runner-up in the British Open last year.

“I always want to play at home because there are so many people come for support.  Besides, it’s a good opportunity to eat Thai food as well as I rarely spend time here,” said Ariya, a standout contender this week.

The greens will, as usualy, provide a daunting challenge for local playerss in the next four days and all agree that putting will play a big role.

“The course set up pretty tougher this year. The greens are firm and fast. It will be quite a challenge out there,” said Ariya, who believed several Thais, eight in the field, will make an impact this week.

“We have a lot of Thais in the field this year and all of them are good players. I believe several will make the top 10.”

Ariya tees up this morning alongside 2016 champion Thompson and Jin Young Ko of South Korea.

Pornanong also agreed that the greens, although in perfect condition, would be hard to get the better of. “The greens are fast. Even a tap of the ball could make it roll down the slope. Putting wise, you need to quickly get used to them,” she said.

Moriya, who posted one top-five and one top-15 finish in the two previous home LPGA events, said: “I think the winning score won’t be as low as last year. You have to work harder on your game plan this year,” she said.