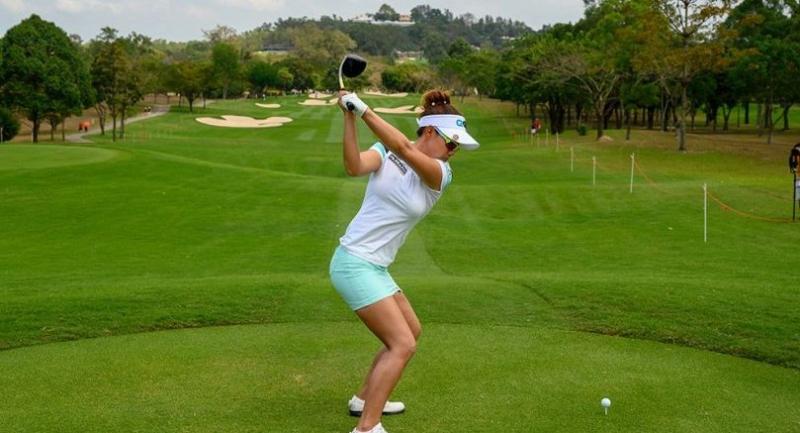 Fairway to go but Jenny Shin is the halfway leader in Pattaya. / Kittinun Rodsupan

Pattaya - A South Korean duly leads the field at the halfway stage of the Honda LPGA Thailand but surprisingly, it isn’t Ji Eun-hee, whose stunning nine-under 63 put her clear after the first round.

Instead it is world No 67 Jenny Shin, who recovered from a sluggish start to shoot a second-round 68 and take a one-stroke advantage into the weekend at Siam Country Club Pattaya Old Course.

The 26-year-old from Seoul was one over par by the fifth before she fired five birdies to become sole leader on 11 under-par-133 on a scorching day.

“I haven't been in contention for a while, so I'm looking forward to tomorrow (Saturday),” said Shin, whose last top-10 finish was equal sixth at the Texas Classic last May and whose only LPGA title to date was the 2016 Volunteers of America Texas Shootout.

“I’ll probably get some rest, hydrate and fuel up a little bit. I think the next two days will be more about my physical ability than my mental ability. I'll focus on that a little bit more.” American Lizette Salas shot a bogey-free 68 to be one back with Australian Lee Minjee and overnight leader Ji. Salas, 29, said she was happy to be tied in second place and added that she had spent a lot of time in the gym during the off season.

“I’m not a rookie anymore, I’m a vet, so it’s time to get serious. I’ve found I can more aggressive with the driving game and things are starting to pay off,” she said.

World No 4 Lee carded a second-round 69, could have tied the lead but a poor approach shot that slipped off the greens saw her finish with a bogey.

“I made two bogeys today, and they were my first two bogeys of the tournament. I'm hitting it pretty solid, and hopefully I can get a couple more putts to drop tomorrow,” she said.

Two-time champion Amy Yang of South Korea fired a 66 to be two off the pace, alongside American Austin Ernst and Amy Olson, with another American, Danielle Kang, one further back on 136. Thai No 2 Moriya Jutanugarn set herself up for a weekend challenge, after shooting a 68 to be four strokes behind the leader with Spaniard Carlota Ciganda, Australian Katherine Kirk and American Ryan O’Toole.

“I was trying to and be patient. I knew I had to be patient and keep trying to score,” said the world No 18, one of the two Thais who came closest at winning this tournament when she finished joint second last year. The other was her younger sister Ariya, in 2013

“Everybody will go out and try to win the tournament,” added Moriya, the 24-year-old one-time LPGA winner. “I will just want keep working on what I have to do, be patient, and commit to what I want to be on the golf course. Just be the best I can be.” World No 1 Ariya bounced back from a disastrous front nine – she had back-to-back double-bogeys on the sixth and seventh holes – to shoot four birdies at the back nine for an even-par 72 that laves her seven behind Shin.

“It was hitting it everywhere on the front nine and had two double-bogeys and a bogey,” said Ariya, who is sticking to her decision not to use any drivers this week.

“Then on the back nine I had to be committed to my shots and I started getting better and made some putts.”