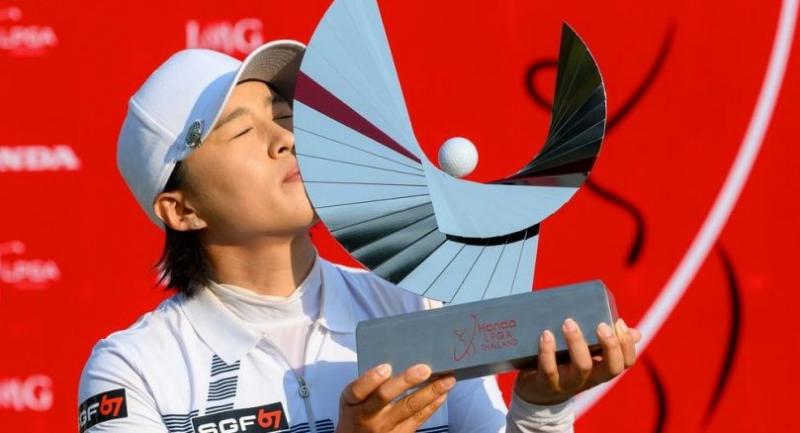 PATTAYA - AMY YANG of South Korea became the first player to achieve a hat-trick of wins at the US$1.6-million Honda LPGA Thailand after utilising well-crafted putts to finish one stroke ahead of Australia’s Minjee Lee at the Siam Country Club Old Course on Sunday.

Lightning stopped play for 50 minutes but that didn’t halt in-form Yang’s title charge as she concluded the final day with a round of 65 for a total 22-under-par 266, the same score she achieved in 2017. She celebrated her first title here in 2015.

It was a great fightback from Yang, who had posted a bogey on the 14th hole to let slip a three-shot lead. After the 15th hole, Yang, Lee and Carlota Ciganda of Spain (the latter after 16), were tied at 20 under. But the gutsy South Korean then sank a birdie from the fringe of the green to regain the lead at 21 under. “I was honestly very nervous, especially the last three holes. It was a tough hole to finish. I was really telling myself just to be patient and do my best,” said Yang who pocketed the winner’s cheque for US$240,000.

With Ciganda already signed off at 20 under, Lee had an eagle putt |opportunity on the 18th that would have forced a play-off. The ball rolled to the lip of the hole, stopped and the Australian’s challenge was over. “I just enjoy coming here. I love the golf course, I love the tournament. Just enjoying it so much,” said Yang, after being asked why she always produced good results here. The world No 29 has won a total of four LPGA titles. Her other victory was her maiden win, in the LPGA Keb-Hanna Bank Championship in South Korea in 2013.

Lee from Perth ended her campaign with an unblemished 66 and a total of 21-under 267 for lone second, her best result in three events this year.

“I really fought out there. Just tried to make as many birdies as I could. Probably didn’t play 15 and 16 the way I wanted to, but I think overall I had a pretty solid performance,” said the 22-year-old Aussie world No 7. Two-time LPGA winner Ciganda was the hottest player of the day, firing two eagles, on holes one and 15, for a 63, the second lowest of the week after Ji Eun-hee on Thursday. The Spaniard finished in lone third on 268.

“I hit lots of greens, hitting great shots, great numbers, and then today the putting was hot,” said the 28-year-old from Pamplona. The result means that, after 13 years, the tournament still has no Thai winner. Moriya Jutanugarn emerged the best Thai player for the second consecutive year after firing a final-round 69 for a total 11-under 277. That left her tied for 10th along with Americans Cristie Kerr and Austin Ernst, and China’s Liu Lu. World No 18 Ariya finished second 12 months ago, which remains the best result by a Thai here.

“It was a tough back nine. I hit everywhere except the fairways. But it was another great week. Playing at home in front of the Thai fans really meant a lot to me,” said the 24-year-old Moriya.

Her sister, world No 1 Ariya signed off with a 70 and a total of 278 for lone 14th, her best position this season after finishing tied 18th in the Tournament of Champions in Orlando and 41st in the Australian Open in Grange last week.

“I was a bit under pressure coming to this tournament as I haven’t been at the top of my game. But I feel more confident after this week and I hope to get better,” said the Thai ace.