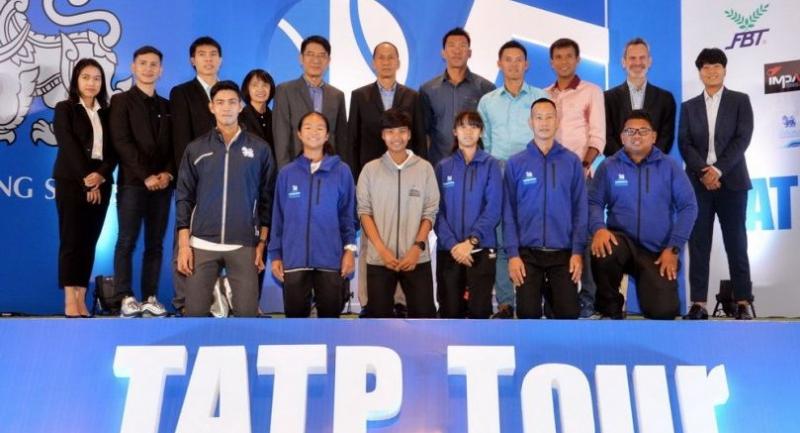 Paradorn Srichaphan, fifth from right in the back row, says the TATP Tour was pivotal to his later success.

Singha Corporation will this year organise a total of 13 tennis events in Thailand, including the TATP Tour series as it celebrates its seventh anniversary.

Former world No 9 and Thai No 1 Paradorn Srichaphan yesterday praised the TATP, the only local pro circuit, and said it had helped develop his game before he made the step up to the international arena.

“We need to get past a strong local tour first,” said the five-time ATP winner.

“The TATP Tour has always been the primary stage for young players to gain experience. It helped me prepare for the upper level of competition on the ITF and ATP.”

The TATP series, each with a total prize money of Bt500,000, starts with next week’s Singha Bangkok Open at the Impact Tennis Academy, followed by the Singha Pattaya Open at Greta Resort and Sport Club in Pattaya between May 4-12, the Singha TATP Championship (also in Pattaya) from May 25 to June 2 and the Singha Classic at the Academy from June 22 to 30.

The season-ending Singha Thailand Masters, with Bt1 million prize money, will conclude at the Academy in mid-September. Live streams of all matches can be watched on the TATP Tour Facebook page.

In terms of the junior circuit or the Singha Grand Slam Experience, there will be three stops: the first for under-12s from March 17-19 at the Academy, the second for under-16s in Pattaya, mid-May and the third, for under-14s, in nearly June, also in Pattaya.

Five players from each circuit, 15 in total, will earn a free trip to Melbourne to attend the Australian Open next January.