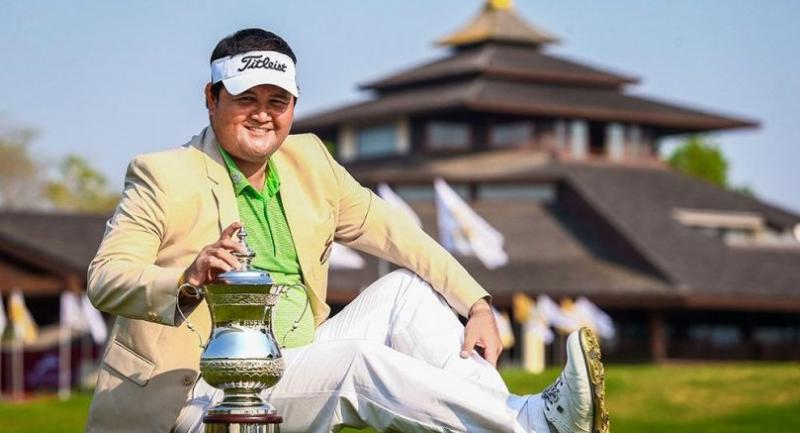 Prom Meesawat poses with the trophy. The 34-year-old from Hua Hin, who triumphed at this course when he was just a 14-year-old amateur in 1999, recovered from two opening bogeys yesterday to fire a final 72 for a total 12-under-par 276, beating young gun Sarit Suwannarat by one shot.

“It’s been a long time since the first victory. But this time it’s very special as I won as a professional player,” said Prom who survived a scare from the 21-year-old Sarit on the final hole to seal the victory.

The big-hitting Sarit trailed the former champion by two shots going to the 18th hole. The rising star had a three-foot birdie chance but missed, before Prom ended with a bogey. Had Sarit made the putt, he would have been in a play-off for the second straight year.

“I had a bad start. But I kept telling myself to be patient as the pins and the course are playing tough. I knew other guys were not shooting scores as well. After I got myself back to even par at the front nine, I tried to be calm and keep fighting,” added Prom, who finally pocketed the prize money (Bt750,000) that was denied him two decades ago due to amateur status.

Prom dedicated his win to his family, including its latest addition – four-month-old son “Bhuthep” who joins three-year-old daughter Metra.

“I will go back to celebrate this win with my family and my babies. But I also have to go back to practise for two Asian Tour events in Malaysia [March 21] and India [March 28],” added Prom who put an end to a title drought of title stretching back to 2014 and the Yeander Tournament Players Championship in Taiwan. Despite missing a chance to force a play-off, Sarit was content with his performance given he picked up a golf club for the first time in three weeks only six days ago after a toe injury.

“That birdie putt was crucial but I misread the lie. Overall I’m happy with how I have played this week as I just came back from injury,” said Sarit, hoping to win one of the home Asian Tour events – the Thailand Open, Queen’s Cup and Royal Cup – this year.

“I plan to do well on the ADT Tour so that I can get an Asian Tour card next year. But If I can win a home Asian Tour, I can get the card automatically,” he added.