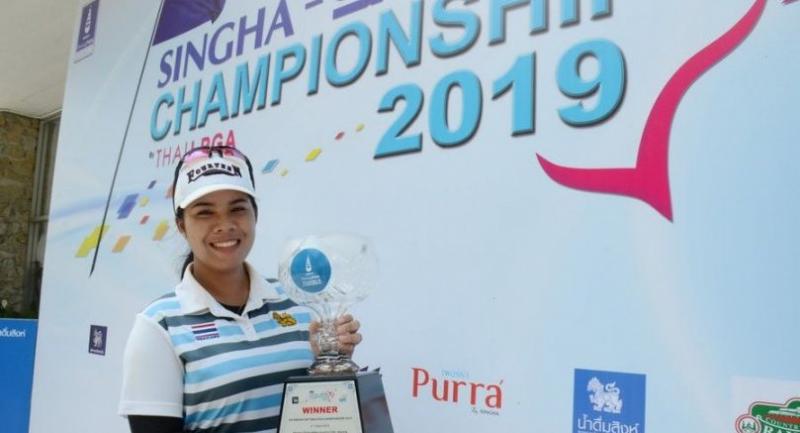 The 16-year-old from Saraburi carded a flawless third and final round of 69 for a total of one under-par-215 to share the lead with Kanphanitnan, who hit a two-under 70.

Arpichaya, who won five Thai LPGA titles last season, set up a duel with her 20-year-old opponent on the 18th hole where both ended up with par. On the second playoff hole, however, the defending champion’s par was enough to seal the deal as Kanphanitnan’s hopes were sunk by a bogey.

“I’m so excited to win my first playoff as a professional player,” said Arpichaya, who took home a winner’s cheque for Bt142,500.

“I had to stay really focused on the second playoff hole and it paid off. I hit 17 greens today and I should have made more putts. But overall I’m still happy to be under par after three days.”

The teenager said she had felt no pressure despite winning five straight Thai LPGA titles last year amid rising expectations from many of those around her in the sport.

“A lot of people keep asking me how many events I plan to win this year but my personal goal is just to hit under par at every tournament I play,” added Arpichaya who, apart from home events, will also enter overseas tours in Philippines, Taiwan and China. “I’d rather concentrate on my own goal, not worry about others.”

Kanphanitnan had to be content with the runners-up prize money of Bt96,285 while Pimpadsorn Sangkagaro, was third on even-par 216 and collected Bt61,175.

Tags:
Sixth title in the bag for 16-year-old Sixth title