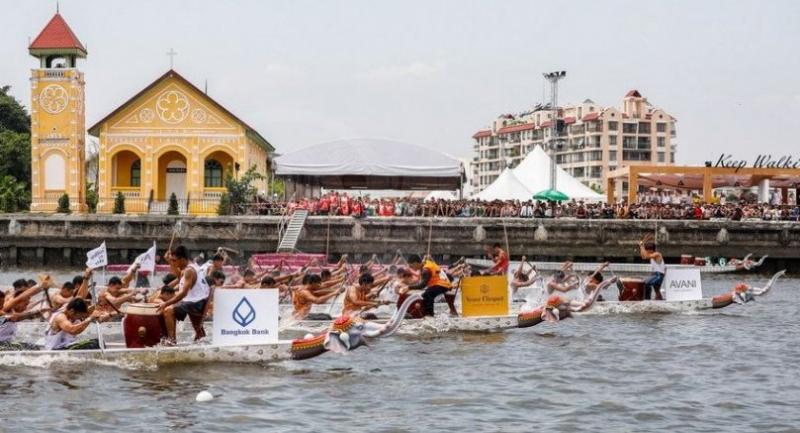 On land, spectators were treated to an opening spiritual blessing ceremony as well as a celebration of Thai culture with dance performances and traditional drumming. On the water twelve teams paddled specially commissioned boats, decorated with artistic elephant heads rising elegantly above the water, the boat were tails inspired by traditional Thai fish motifs. The teams included members from the Royal Thai Navy, the Royal Thai Navy Seals as well as international teams from China and the Philippines.

The Asia Cup Indoor Rowing Tournament was also held concurrently with teams from 9 countries - Bahrain, Chinese Taipei, India, Iraq, Japan, Malaysia, Pakistan, Saudi Arabia, and Thailand. Each digital heat consisted of 8 rowers giving it their all across 2km with both female and male competitors vying for the coveted Asia Cup trophies. The winners of the woman’s Asia Cup was Yi-ting Huang from Chinese Taipei and Mr. Parminder Singh from India taking the men’s championship.

Visitors to the three day event are also treated to luxury champagne tents, vintage car displays, and musical concerts by top Thai artists including Atom, J Jetrin, New Jiew and Singto Numchok. The foodie village is well stocked with a host of pop up food stalls by a selection of Thailand’s top restaurants and Bangkok’s favourite chefs.

The exciting event has not only been about fun and games – a generous sum was raised through ticket sales, for many elephant charity projects during the event. Funds from the event will be donated to various projects including the Zoological Parks Organisation of Thailand which supports veterinary and educational projects to improve the year-round lives of elephants and mahouts in the Surin Province where ex-street elephants face ongoing hardship.

Other significant benefits from the money raised by the tournament include: the ongoing Thai Elephant Therapy Project which has been underway since 2009 in conjunction with Chiang Mai University’s Department of Occupational Therapy, with future clinics to include children with Down’s syndrome and other conditions now committed until the end of 2019 as well as the funding of Asia’s first workshop to show traditional elephant trainers and camp owners the benefits of Positive Reinforcement Training for captive elephants with additional workshops this year in Myanmar reaching teams responsible for over 200 elephants.