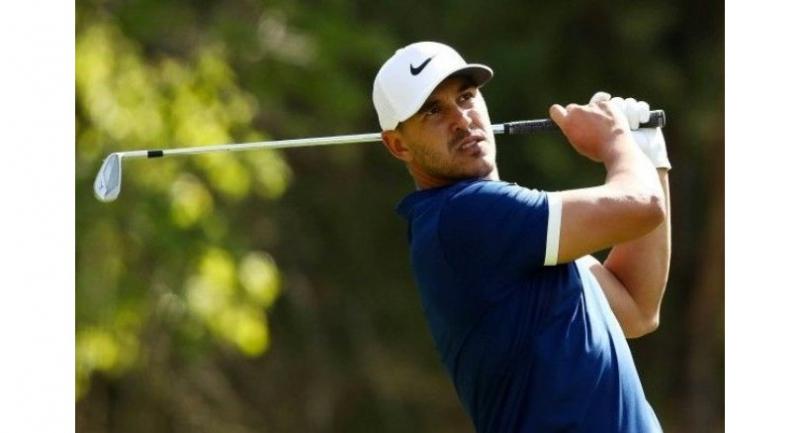 Brooks Koepka and Bryson DeChambeau burst out of the crowd Thursday at Augusta National, firing six-under par 66s to share a one-shot lead over Phil Mickelson after the first round of the Masters.

Hours after 14-time major champion Tiger Woods electrified the crowd by briefly putting his name atop the leaderboard, Koepka lit up the fabled course with five birdies in the space of six holes to break free atop a crowded leaderboard that at one point saw nine players sharing the lead.

But DeChambeau had an answer, roaring home with four straight birdies -- and six birdies in his last seven holes.

Mickelson, the three-time Masters winner who at 48 could become the oldest major winner ever, kept pace with the 20-something leaders with five birdies in the last seven holes in his five-under 67.

That matched his opening round in 2010 -- the year Mickelson claimed his third green jacket.

He nearly aced the par-three 16th and a birdie at 18 put Mickelson one shot in front of 43-year-old Ian Poulter and 34-year-old Dustin Johnson, who shared fourth place on 68.

On a day when red-hot Rory McIlroy was left to regret six bogeys in his one-over 73, Koepka didn't put a foot wrong.

He nabbed the first of his six birdies at the par-five second to make the turn at one-under.

Koepka rolled in a five-footer at the 10th and after a par at 11, he drained a putt from off the green at 12, rolled in a four-footer at 13 and curled in a 16-footer at 14. He hit his third shot to two feet for a birdie at 15 as he stretched his lead to as many as two strokes.

DeChambeau, however, kept the pressure on. He, too, nearly aced 16 and his 195-yard second shot at 18 rattled the flagstick but didn't drop, leaving him a last tap-in birdie.

There was little in the early scores to predict the late afternoon fireworks.

Woods pronounced himself pleased with his two-under effort -- which matched his first-round score for three of his four Masters triumphs.

He thrilled fans with back-to-back birdies at 13 and 14 to join a big leading group on three-under.

But he couldn't make a further gain at the par-5 15th, and he missed a nine-foot par-saving putt at 17.

"I felt like I played well and I did all the things I needed to do today to post a good number," said Woods, despite missed chances from inside 10 feet that cost him on the front nine.

"I drove it well, hit some good iron shots, speed was good on the greens.

"And it was tricky," he added. "The wind puffs up, it goes down, it switches directions. It's typical of this golf course. It's hard to get a bead on exactly what it's doing at all times."

But Woods noted that the winds often died down in the afternoon, and when they did Poulter was among those taking advantage.

He grabbed three birdies in a four-hole stretch starting at the par-five 13th. At the par-three 16th he stuck his tee shot three feet from the pin.

"My whole game was together, from the first hole to the 18th hole," said Poulter, who was a rare bright spot for England on a day on which world number one Justin Rose carded a 75 and in-form Paul Casey signed for an 81.

Scores after Thursday's opening round of the 83rd Masters tournament at par-72 Augusta National Golf Club: