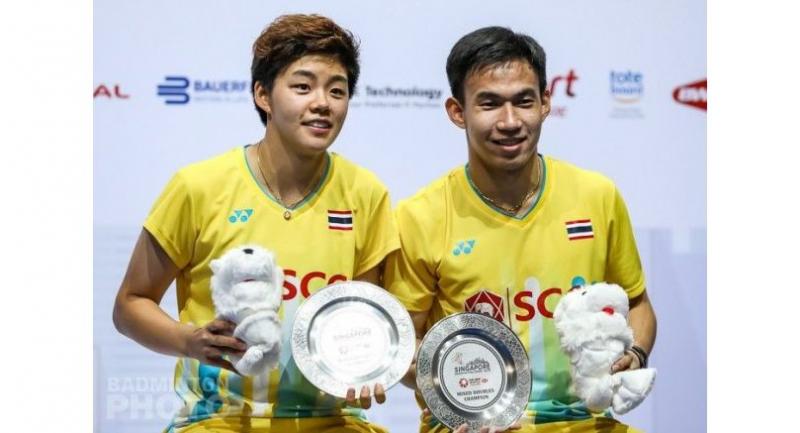 THAILAND’S in-form Dechapol Puavaranukroh and Sapsiree Taerattanachai lifted their first World Tour 500 title together after they outclassed Tan Jiang Meng and Lai Pei Jing of Malaysia in the Singapore Open final on Sunday.

A day after handing world No 1 and world champions Huang Yaqiong and Zheng Siwei of China their first loss of the year in the semi-final, the Thai duo rode their formidable form into the final, thrashing the Malaysian rivals 21-14 21-6 in just 32 minutes.

This is the third time lucky for the Thais after losing two finals in January, to Chang Peng Soon and Goh Liu Ying of Malaysia in the Thailand Masters, and to Yuya Watanabe and Arisa Higashino of Japan in the Malaysia Masters.

“I’m thrilled because this is our first [World Tour 500] title win together,” said Sapsiree, the only player in the world to have won titles in singles, doubles and mixed doubles on the BWF Tour.

Her singles triumph came at the US Open in 2013, the doubles with Savitree Amitrapai in India, 2012, and with Puittita Supajirakul in Thailand, 2016 and 2019, and the mixed doubles with Dechapol in Switzerland, 2017, and Singapore, 2019.

“I’m so overwhelmed to win this event which is our biggest together. I really have to thank the fans for their support even from the social media,” said 21-year-old Dechapol.

For the 26-year-old Sapsiree the win capped a successful comeback following her left knee injury at the SEA Games in September 2018.

“Despite the surprise victory in the semi-final, we felt under no pressure at all against the Malaysian team. We tried to play our game and stay focused,” added Sapsiree, who split the winner’s prize money of US$28,045 with her partner.

The Thais dictated play right from start, using their superior court coverage and teamwork to take the final’s opening game in just 17 minutes. They carried their momentum into the second game with clever shot selection and attacking tactics that kept the Malaysian pair in disarray to clinch match point in just 15 minutes.

They also became the first Thai pair to win the Singapore Open doubles, following Ratchanok Intanon who won the women’s singles in 2016 to become the first Thai to triumph in the city-state.