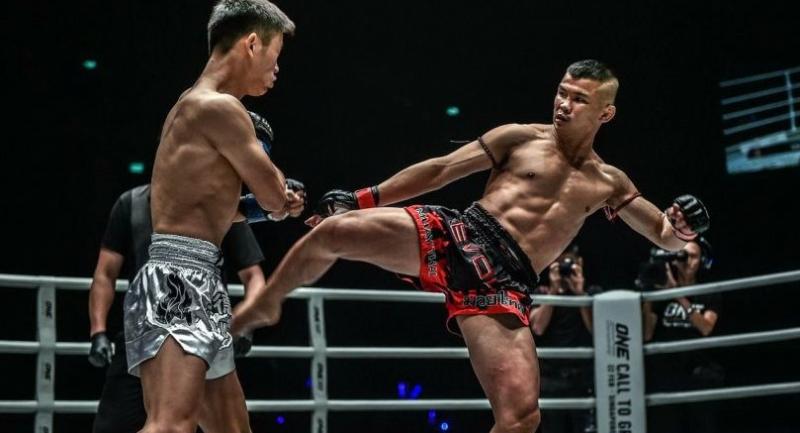 Nong-O Gaiyanghadao blasts a kick to Han Zi Hao of China in the One: Clash of Legends at Muangthong Thani in February.

The May 10 fight night sees Thailand play host to a showcase of the best martial arts warriors – muay thai fighters and kickboxers – from around the world.

Nong-O will defend his bantamweight (65.8kg) title against Hiroaki Suzuki of Japan while Petchdam will face Elias “The Sniper” Mahmoudi of Algeria for the inaugural ONE Flyweight Kickboxing World Championship.

Multiple world champion Nong-O captured the One title by unanimous decision against China’s Han Zi Hao here in February. He is now set to make the first defence against the dangerous Japanese fighter.

Striker Suzuki is one of the most exciting talents in One Super Series. He burst onto the scene with a devastating performance against Deividas Danyla last November, then followed up with another scintillating showing against Mohammed “Jordan Boy” Bin Mahmoud last January.

In the co-main event of the evening, Thailand’s Petchdam will attempt to make history by becoming the One Championship’s first flyweight (61.2kg) kickboxing world champion when he takes on opponent Mahmoudi.

Six Thais will be in action in the ninth round of the One Championship this year, with 12 bouts on the card.

Muay thai superstar Rodtang “The Iron Man” Jitmuangnon is another local hope featuring in the event. After beating Hakim Hamech of France in the One Super Series flyweight in Tokyo last month, Roadtang returns to showcase his fearsome striking skills against Sok Thy, Cambodia’s national kickboxing champion.

Rodtang Jitmuangnon vs Sok Thy