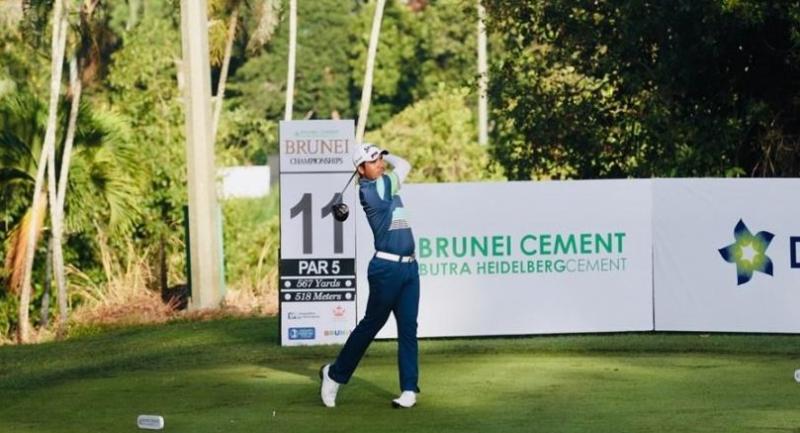 Bandar Seri Begawan - Thailand’s Itthipat Buranatanyarat fired an impressive seven-under-par 63 to set the early pace in the opening round of the Butra Heidelberg Cement Brunei Championships on Wednesday.

The 25-year-old Itthipat, who claimed his third Asian Development Tour (ADT) victory in January, was sharp off the tees, trading eight birdies against one bogey to take a one-shot lead over Japan’s Nari Gamma at the US$75,000 event which is staged at the Empire Hotel and Country Club.

Starting on the back nine 10, Itthipat birdied two of his opening three holes before dropping a shot on hole 13. He recovered with consecutive birdies on holes 17 and 18 for an outward 32.

The Thai, who currently holds the top spot on the current ADT Order of Merit rankings, stayed bogey-free in his second nine, notching birdies on holes two, three, four and six for an inward 31.

“My goal today was to shoot at least two-under-par so I am happy to have achieved it today. I played well because I kept my ball on the fairway and gave myself a chance to hit it close on the approach,” said Itthipat, who only missed two fairways.

“I feel pretty relaxed this week because I know I can do well here and I will stick to my game plan for the next couple of rounds,” added the Thai, who finished third in Brunei last year.

Gamma, who missed the cut in his Bruneian debut last year, opened his campaign with a sizzling 64 which also marked his personal-best round of the year.

“I had a fast start today and was giving myself a lot of birdie opportunities. My short game really helped me today and I had a couple of good saves.

“The highlight of my day was on hole eight when my second shot went into the water but I made a great up-and-down from 30 yards to save bogey,” said the 30-year-old Gamma.

Koh, chasing his maiden ADT victory this week, put himself in the mix with three birdies in his closing four holes.

“I putted quite well today and made a few good iron shots on the front nine. I have been hitting the ball good this year and I think I am just reading the greens better today.

“I did well coming down the stretch with good birdies on holes 15, 17 and 18. I had only one bogey on hole 16 because of a wrong club choice but overall it was a great round,” said Koh.

All ADT events offer Official World Golf Ranking (OWGR) points. The winner will receive at least six OWGR points while the top six players and ties will also earn points based on a sliding scale.

The Organising Committee of the Butra Heidelberg Cement Brunei Championships has announced a charity drive through its “Birdies for Charity” program. Through the generous contributions of its donors, the program will receive B$10 for every birdie recorded during each round.

All pledges collected after four rounds will go directly to the Dana Pengiran Musa Mahkota Al-Muhtadee Billah for Orphans and the Pusat Ehsan Al-Ameerah Al-Hajjah Maryam.