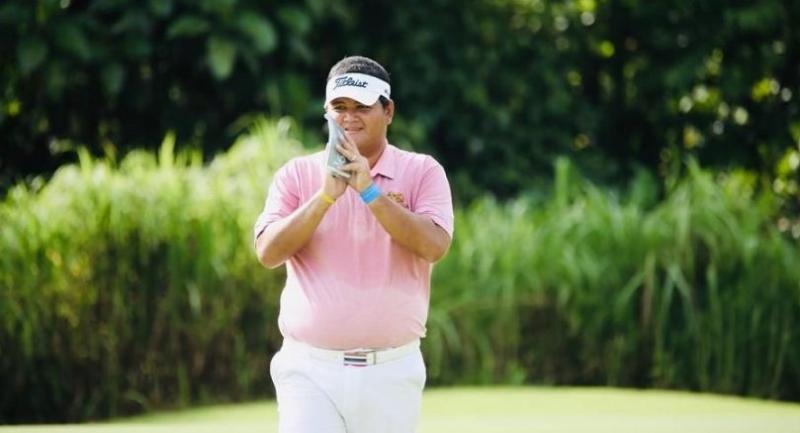 Bandar Seri Begawan  - Thai star Prom Meesawat showed his battling spirit by rallying with a birdie on the third play-off hole to defeat Japan’s Naoki Sekito and clinch the Butra Heidelberg Cement Brunei Championships in the final round on Saturday.

Prom, a two-time Asian Tour winner, who is playing on a sponsor’s invitation this week, started his final day four shots back of the lead.

He hauled himself quickly back into contention by firing seven birdies on holes two, six, seven, 10, 11, 12 and 15 before dropping his only shot of the day on hole 16 at the US$75,000 Asian Development Tour (ADT) event.

Prom’s four-day total of 20-under-par 260 was enough for him to force his way into a play-off with Sekito, who stunned the field with an impressive 61 in regulation play at The Empire Hotel and Country Club.

The duo went head-to-head on the first play-off hole held on 18 but both of them had to settle for pars after missing their birdie attempts. Sekito had an opportunity to win on the second extra hole but narrowly missed a 10-footer and settled for par with Prom.

The play-off was then moved to the ninth hole where Prom eventually triumphed after striking a solid approach to eight-feet and rolling a decisive putt in for birdie. Naoki settled for second place after failing to make birdie from off the green.

“I had a birdie on hole 15 and was three-shots clear of the field. I thought it was good enough, but I didn’t expect to make that bogey on hole 16 and for Naoki to birdie the last two holes.

“But I am glad to have won on the third play-off hole, it was a great fight. That last approach shot on the ninth hole was probably the best iron shot of the week for me,” said Prom.

With good friend Kiradech Aphibarnrat withdrawn from the event due to a knee injury, Prom was pleased to have won the title on his behalf. He will take home a winner’s purse US$13,125 and a minimum of six Official World Golf Ranking (OWGR) points.

“It always feels great winning a golf tournament especially playing on an invite this week it’s an honour to win this event. Kiradech won last year and it’s a shame he didn’t get to play all four rounds.

“I told him after the second round that I would try and defend the title for him and I am glad I was able to keep to my word,” added Prom, who is nicknamed ‘Big Dolphin’ due to his burly physique and because he hails from the coast town of Hua Hin.

Despite missing out on back-to-back ADT victories since making his breakthrough last week, the 21-year-old Sekito took pride in his flawless round highlighted by nine birdies, which marked his personal-best round since joining the play-for-pay ranks in 2017.

“61 is my best score and I am very happy to have broken my personal-best record. I did my best, especially losing to Prom in a play-off. He did really well. I have no regrets this week and it is looking like a good season for me.  I hope to continue on this momentum and take one of the seven spots on the ADT Order of Merit,” said Sekito, who moved up to second place on the ADT Order of Merit.

The Organising Committee of the Butra Heidelberg Cement Brunei Championships announced a charity drive through its “Birdies for Charity” program at the start of the week. A total of 947 birdies were recorded after four rounds and through the generous contributions of its donors, the program received a total of B$11,000.

All pledges will go directly to the Dana Pengiran Musa Mahkota Al-Muhtadee Billah for Orphans and the Pusat Ehsan Al-Ameerah Al-Hajjah Maryam.