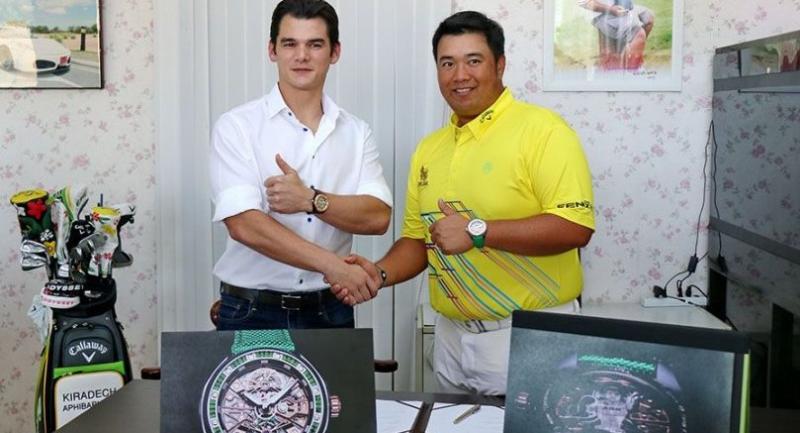 World No 42 Kiradech Aphibarnrat believes he will be fit in time for the second major of the year, the PGA Championship, after sustaining a right knee injury at the Masters last month.

The Kingdom’s ace golfer is taking a break after damaging his ACL (anterior cruciate ligament) more than a month ago, an injury that flared up and forced him to withdraw after the first round of the ADT Brunei Open last week.

He flies to the US tonight to prepare for next week’s AT&T Byron Nelson in Texas, the final warm-up before the PGA Championship, which takes place from May 16-19.

“I will have a few weeks’ rest before Texas and the PGA Championship, which should be enough for me to recover,” said Kiradech, who has just signed a two-year deal as a brand ambassador for Swiss watchmaker Avantist.

“I’m feeling so much better since Brunei. My doctor suggested that I take a break so I didn’t practise at all for a week,” added Kiradech, who will resume his training routine when he is back in the US.

The Thai No 1 insists his condition doesn’t require a surgery and is satisfied with his performance so far in his debut season on the PGA Tour, highlighted by a tie for fourth and a lone third finish at World Golf Championships tournaments in China and Mexico respectively.

“I’m quite happy to have secured my PGA card for the next season because of solid results in China and Mexico. But my goal is to win a PGA title as soon as possible,” he said.

The 29-year-old admitted he used to think that winning a PGA title was out of reach but that he changed his mind after winning four European Tour titles and earning a full PGA Tour card, the first Thai player to do so.

“I have started believing that it [winning a PGA Tour title] is possible,” he added. “I just have to work more on the physical aspects as American and European players are a lot stronger.”

Due to his success, Kiradech has become a role model for the younger generation, something that makes him proud.

“I’m very happy when young golfers get inspiration from me and want to pursue their dream on the PGA Tour,” he said. “Now we have several players like Sadom Kaewkanjana and especially Jazz Janewattanond [Thai No 2 and world No 72] who I believe can earn a card on the PGA or go even further than me.”

As a result of his deal with Avantist, Kiradech will wear a specially designed Arm Edition Sapphire Tourbillon watch which is limited to just 9 pieces. These watches feature a skeletonised tourbillon movement set on a transparent sapphire crystal plate that gives the illusion it floats mid-air inside the watch.

Combined with components in 18k gold and titanium, each individual watch is painstakingly hand-assembled in Switzerland and takes up to 6 months to complete.

“The collaboration between Avantist and Kiradech represents our mission to celebrate the achievements of the leading pioneers of our generation. The name Avantist is short for ‘Avantgardist’ meaning pioneer or leader. Kiradech is a pioneer in Thai golf and an inspiration not just Thai and Asian golfers but to fans the world over. He inspires people to pursue their dreams and leads by example. We are very excited to work with him.” said Avantist founder Keeran Janin.