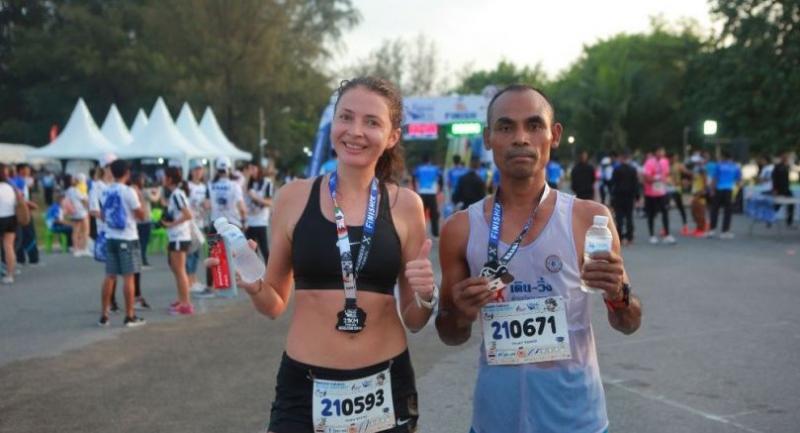 Krabi – Former allergy patient Prawit Somnin and Ukrainian travel agent Olena Nikitas stole the limelight in the Bangkok Airways Krabi Half Marathon by leaving their opponents far behind to win the men’s and women’s 21km categories at Thara Park yesterday. Surat Thani-based Prawit crossed the line first in 1:26.58  hours, several minutes ahead of Rattananit Buathong who had to be content with the second best with his time of 1:30.25 hours. It was one of his biggest wins after he won the 10km event at this tournament last year.

“I’m quite happy with my time with an average of 4.12 minute per kilometer,” said the 44-year-old worker of a palm oil company. “I did quite well judging from the tough route with so many hills. My strategy is to run with short step on the hills,” added Prawit a former National Junior Games athlete who had to resume running when he was diagnosed with allergy five years ago.

“I couldn’t breathe properly back then. Doctor suggested I should exercise get rid of allergy. I also stopped smoking and drinking from then on,” said Prawit whose has his eyes firmly fixed on a full marathon in Hat Yai on May 26.

“I used this event as a  warm up before my first full marathon tournament. I train quite hard every day ( two in the morning and three in the afternoon) to make sure that I can compete with others,” Prawit added. In the women’s event, Nikitas of Ukraine produced her personal best of 1:32.36 hours to beat Thailand’ , Naleewan Rattanaphan who came far second in 1:47.22 hours.

“I’m quite happy because this is the best time for me in 21km. I spend six months in Thailand for running and the rest of the year in Ukraine,” said the 36-year-old from Laviv who has posed top three finishes in nine events over the past five months. She also won in Surat Thani and Phannga ahead of the Sunday’s victory.

More than 3,500 athletes competed in the opening stop of all six Bangkok Airways Boutique Series. The next series is due in Samui on June 2 while the remaining four are in Lampang on July 7, Phuket on August 4, Chiang Rai on September 15 and Chiang Mai  on November 3