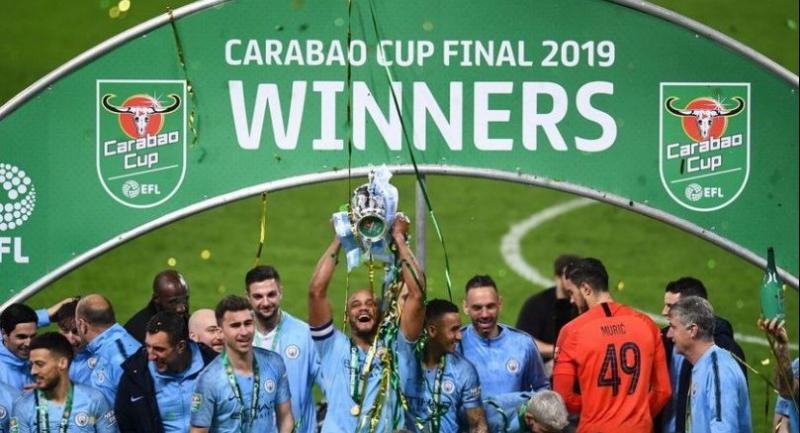 Carabao Group has renewed its two-year contract with EFL for “Carabao Cup” and will focus on sport marketing plans as it seeks to become a “world class brand” after penetrating the market on every continent.

In the domestic market, Carabao Dang will strengthen its presence, and will penetrate the international market with a sport marketing strategy.

The brand recently signed another two-year contract with EFL to maintain the official main sponsorship of the Carabao Cup. Marketing research from the previous season of EFL shows that Carabao gained 106 per cent more brand awareness, which has paved the way for the brand in the international market and increased 2018 export sales to 52 per cent.

Carabao Group is looking to fulfill its goal to become both a world-class brand and a world-class product with all-in-one state-of-the-art technology that cuts cost and increases profit to accommodate the brand’s full-on international expansion over the next three years.

Sathien Setthasit, the CEO of Carabao Group Public Co Ltd (CBG) or CBG, revealed that the marketing research done through the EFL platform earlier in March for the 2017-2018 season found that Carabao has received a 106-per cent bump in brand awareness (at 66 per cent, up from 32 per cent the previous year). The research result agrees with the group’s marketing outlook, especially for the new countries in the international market where Carabao Dang has been launched – in Europe, America, Africa, Australia and Asia.

The success led Carabao Group to renew its EFL cup sponsorship for 2021 and 2022.

“Another factor that helps support our extensive expansion is combining our production plants as an integral, vertical factory on 200 rai of land in Chachoengsao province during the past 2-3 years to reduce costs and generate more profit in the long term,” said Sathien.

CBG now has the Asia Pacific Glass (APG) glass bottle manufacturing plant, the Carabao Tawan Dang (CBD) bottling plant, and Asia Can Manufacturing (ACM) to help reduce cost for outsourced parties and to allow the group to supply other brands. This production integration has been set in motion to accommodate the regional market growth in the next 2-3 years.

“Carabao Group’s distinctive recognisability for both the local and international markets will surely help the brand to be well accepted and better known,” said Sathien.

He also stressed the importance of sports marketing as the brand’s key strategy to create brand awareness for Carabao Dang, not only as a world-class brand in the domestic market, but also as an entrant product in new and promising markets such as Mexico and Uruguay in South America as well as Ghana, Nigeria and Djibouti in Africa.

In Europe, Carabao Dang has a presence in 20 countries, while Australia and Korea have shown keen interest to market Carabao Dang. The exponential growth of the non-carbonated Carabao Dang can in China has strengthened the brand’s ultra-premium image that has allowed consumers to learn and become familiar with the products via Bao Dang girls at sales points in 20,000 Sinopec gas stations throughout that country.

Carabao Dang is now available in 15,000 branches in five northern regions, including Heilongjiang, Harbin, Peking, Hubei and Shandong. The brand is looking to cover 100 per cent of Sinopec gas stations by the end of the year, which it expects will springboard the brand’s presence and growth in China. As for the markets in CLMV, the growth is gradual at 67 per cent compared to the same period of last year especially in Cambodia where it experienced the highest growth.

As for the domestic market, Carabao Dang sees small growth compared to the same period of last year as the energy drink market is slowing. However, products distributed by Carabao Group have seen 27-per cent growth as a result of the Group’s ability to cover 90 per cent of the country. Overall income reached Bt14,463 million, an increase from the previous year of Bt1,558 million, or 12.1 per cent. Income from domestic sales is 55 per cent and the income from international market has increased by 45 per cent. Considering the income from the energy drink product alone, 52 per cent comes from international markets, which are higher than the 48 per cent from the domestic market.

As for its marketing strategy, Carabao Dang will continue to use sports marketing as its key plan with a series of promotional events, brand awareness events in overseas markets, product experience through Bao Dang girls, an increase in distribution channels and communication via both online and offline media.

The brand is also looking to create a strong brand image through its own media channels, such as the Carabao Group on various social media, its website, Facebook page, Instagram, LINE and YouTube. The group is confident that the strategies will strengthen Carabao Group over the next three years and result in it becoming Thailand’s market leader in the energy drink market and to secure more income from the export business compared with the previous year.