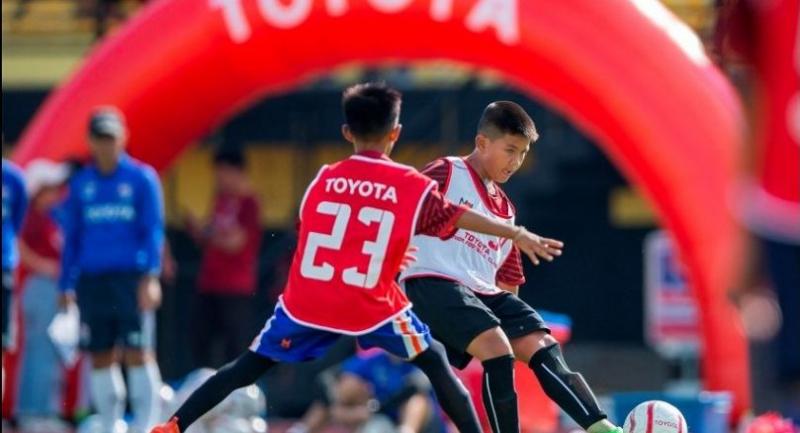 Thai juniors during a clinic session

Toyota Motor Thailand has joined forces with the Football Association of Thailand and Ekkono Method Soccer Service to organise the 2019 Toyota Junior Football Clinic, from which 24 under-12 players will be picked to represent Thailand at the U12 Junior Soccer World Challenge finals in Japan.

The event, now in its eighth year, aims to prepare and develop under-12 players, the primary stage of Thai football, to pursue a career in football. Youngsters who take part in the programme will be trained with proper basic skills under the instruction of professional coaches.

The clinic will conduct training sessions in seven provinces all over the country and then choose 210 boys – 30 boys from each stop – to take part in further coaching.

Only 60 will then be picked for the final round, at which further training will be conducted at Bangkokthonburi University in July. Each finalist will receive a certificate from the Football Association of Thailand.

A squad of 24 players will travel to Osaka later this year to represent Thailand in the World Challenge. Thailand have won the event for the last three years, when it was still called the Toyota International Junior Cup and held in Nagoya, Japan.

Last year the local boys won all their seven games in the three-day competition held at the Toyota Sports Centre in September.

The seven clinics will be held on May 18 in Sukhothai, May 25 in Prachuab Khirakhan, June 1 in Suphanburi, June 9 in Buriram, June 15 in Krabi, June 22 in Chon Buri and June 29 in Chiang Rai, with the round on July 6 in Bangkok