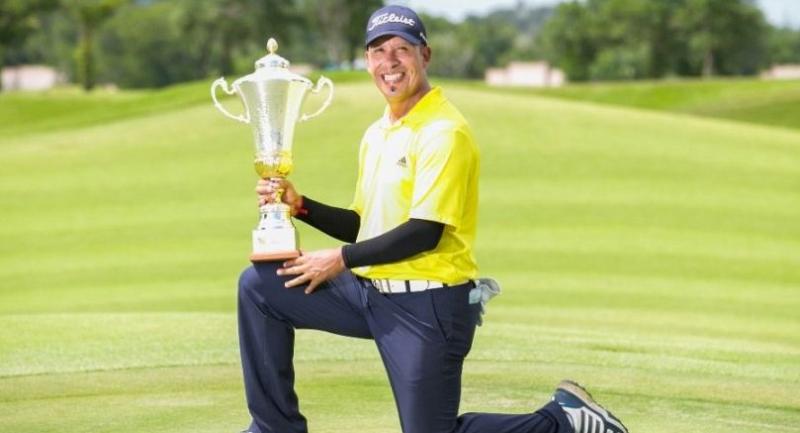 Miguel Carballo of Argentina with his first trophy in 2019. After missing a four-foot putt on the final hole, the 40-year-old found himself among a three-way tie for the lead on 15-under-par 265 along with Chinnarat and the 16-year-old Kim.

But utilising his superior experience, the ice-cold Argentinian was the only one to hit the fairway on the extra 18th hole before sealing his win with a birdie as rain started pouring at the par-70 6,566 yard Laguna Phuket Golf course.

“I had this unbelievable feeling. It feels great to win the play-off,” said Carballo after winning his second ADT title since the Ciputra Golfpreneur Tournament in Indonesia last year. The Phuket tournament was co-sanctioned by the All Thailand Tour.

The hiccup on 18 failed to shake the unflappable Carballo, who started practising putts straight away. The cool professionalism paid off.

“It [missing on 18] did not affect me at all. I view it as a good opportunity to practise and come out with a better putt next time. Besides, I always win the play-off,” quipped the Argentinian who has indeed won all three play-offs he’s contested. Carballo flew back home right after pocketing the winner’s cheque for Bt300,000.

“I can’t have a better way to finish my tour in Asia after three months,” added the veteran, the first foreign winner on the All Thailand Golf Tour since American John Catlin at the Singha Chiang Mai Open last September. This is also his second top-10 finish in 10 starts this season.

Chinnarat had led by a stroke before being overtaken when Carballo landed an eagle at the 14th. The 30-year-old three-time Asian Tour winner, despite missing his chance to end a 10-year title drought, was pleased to be back at the top of the leaderboard.

“I have no fear now about being in the lead, after getting really nervous about it on previous occasions. I’m getting my confidence back bit by bit and I’m sure a victory will come soon,” said the Thai, who won Bt149,500.