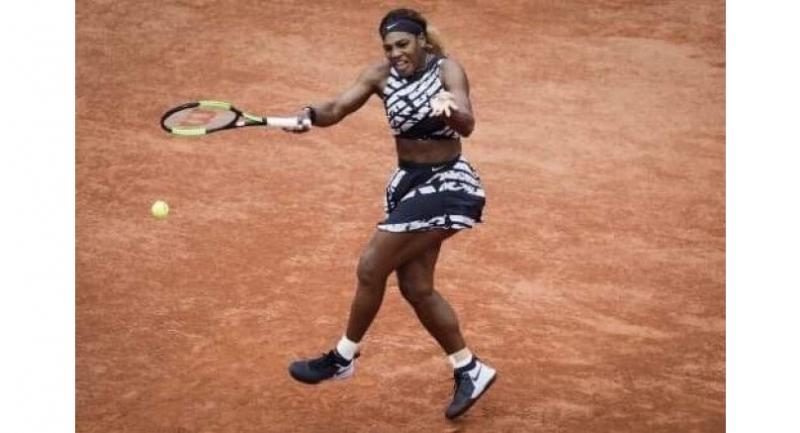 Serena Williams survived a first-round scare at the French Open on Monday as she battled back from a set down to defeat Russian world number 83 Vitalia Diatchenko, while Rafael Nadal and Novak Djokovic both eased through.

The 37-year-old Williams, who is attempting to equal Margaret Court's all-time record of 24 Grand Slam titles, racked up her 800th career main draw win with her 2-6, 6-1, 6-0 victory in front of a half-full Court Philippe Chatrier.

Nadal started his bid for a record-extending 12th men's Roland Garros title with a 6-2, 6-1, 6-3 win over German qualifier Yannick Hanfmann, before world number one Djokovic saw off Poland's Hubert Hurkacz in straight sets.

This was only Williams' fifth match since collapsing to defeat late on against Karolina Pliskova in the Australian Open quarter-finals earlier this year, but she showed excellent form in the second and third sets in Paris.

"I just got nervous out there and I stopped moving my feet. And I was, like... 'You gotta do something'," said the 10th seed, who has not won a major title since the 2017 Australian Open.

"But compared to other matches, I'm always a little nervous in Grand Slams, especially in the first round."

The three-time French Open winner, who took to the court wearing a black and white cape adorned with the words 'mother, champion, queen, goddess', started poorly, and was punished as Diatchenko broke to love in the fifth game en route to the first set.

But having made 14 unforced errors in the opener, Williams made just 10 more in the rest of the match as she overpowered her opponent, dropping only one game in the process.

- Nadal cruises into round two -

Nadal, a 17-time Grand Slam champion, set up a clash with another German qualifier -- world number 114 Yannick Maden -- in round two.

Nadal had suffered three consecutive semi-final defeats earlier in the clay-court season, but appeared to find his best in an Italian Open title success sealed with victory over old rival Djokovic, while his French Open win-loss record now reads 87-2.

"It's always amazing to play here... It's been an important place in my career," the second seed said.

"I played a good tournament in Rome which was very important for my confidence. Now we'll see."

The 32-year-old Nadal raced into a 3-0 lead in the opening set before a second break of serve in the eighth game sealed it after just 40 minutes.

The second set was over in a flash as Nadal crushed nine winners past the beleaguered Hanfmann.

The winning line honed into view when Nadal broke after a lengthy game to take a 2-1 advantage in the third, and the Spaniard completed the job on his first match point as world number 184 Hanfmann blasted long.

Djokovic laid down an early marker in his bid to hold all four Grand Slam titles simultaneously for the second time, powering past Polish youngster Hubert Hurkacz.

The 15-time major champion impressed in a 6-4, 6-2, 6-2 triumph and will face Swiss lucky loser Henri Laaksonen in round two.

"I put myself in a situation where I can actually make history of tennis again and obviously I have very high ambitions for this tournament," said the top seed.

Twelve months ago, Djokovic dropped out of the world's top 20 after a shock quarter-final loss to Marco Cecchinato and even pondered skipping Wimbledon, but he has instead reclaimed his place at the top of the game.

Former world number one Caroline Wozniacki collapsed to a 0-6, 6-3, 6-3 loss to Russian world number 68 Veronika Kudermetova in the first round.

"I think she got very lucky at the start of the second set and took advantage of the opportunities she got," said Wozniacki.

Sixth seed and two-time Wimbledon champion Petra Kvitova was forced to pull out before her scheduled opener against Sorana Cirstea with a left arm injury, but said she should be fit for Wimbledon, which starts on July 1.