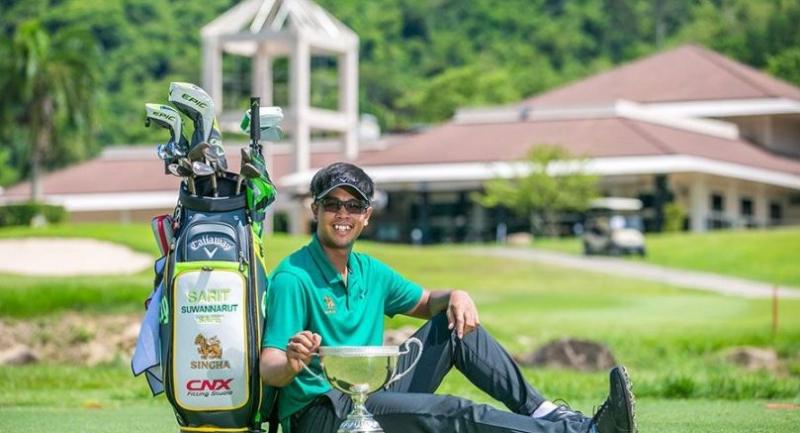 After being dogged by bad luck for months, young gun Sarit Suwannarat finally returned to the winner’s circle with a one-stroke victory in the Bt2-million Singha Classic at the Royal Hills Golf Resort and Spa in Nakhon Nayok yesterday.

The 21-year-old was four shots behind overnight leader Poosit Supupramai before firing an unblemished final-round 66 to card a total 14-under-par 270 for his second All Thailand Golf Tour crown after the 2016 Singha Classic in Pattaya when he was still an amateur.

After finishing third in the Asian Tour’s Thailand Open last June, Sarit gained confidence only to be hit by a back injury that lasted for months. Then in March, a door fell on his toe just six days before the Singha Masters in Chiang Rai. He still managed to land second there but then had to miss two events to heal the injury.

“I felt a bit disappointed that those things happened when I was playing well. But I feel relieved to finally win again. I was a bit nervous during play though,” added Sarit who returned home with the winner’s cheque of Bt300,000. The Bangkokian credited a new putter and his caddie and friend Karit Kitipongpatana with playing a significant role in his final-day performance at the par-71 layout of 7,173 yards. His buddy Karin had also carried the bag for him when he won his maiden title three years ago.

“He really calmed me down on the greens and kept telling me that I could make it. It really helped me out there. He just finished college and will carry for me full time now,” added Sarit who is targeting an Asian Tour win on home soil this year in order to earn a full Asian Tour card.

Poosit, who led for three rounds, signed off with a 70 and total 271 to share second place alongside South Korean Joohyung Kim and Kasidit Lepkurte.

"I actually am quite happy with the way I've been playing this week. I stick to my game plan and have a good control of myself. There are a few things I need to fix on in the final day