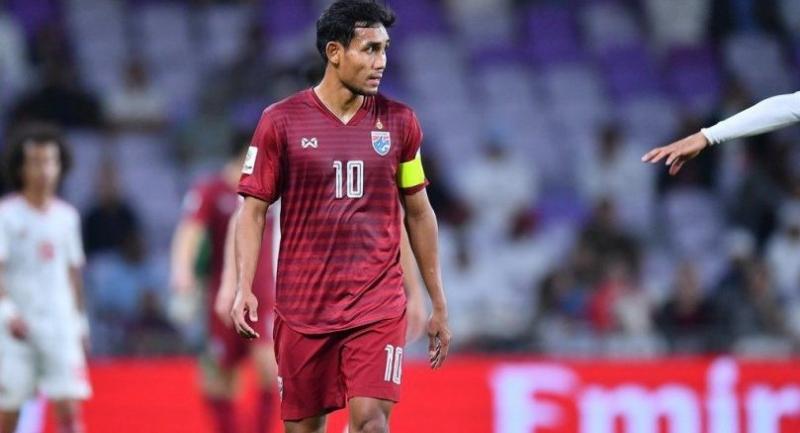 Thailand’s skipper Teerasil Dangda believes he will be fit for tomorrow’s “battle for dignity” against Vietnam, Southeast Asia’s reigning No 1 team, in the 47th King’s Cup at the Chang Arena in Buri Ram. The 30-year-old forward is positive about his chances of winning his 100th cap in the game against AFF Suzuki Cup champions Vietnam, which kicks off at 7.45pm and will be broadcast live on Thai Rath TV 32. The tournament opener between Curacao and India begins at 3.30pm.

Uncertainty lingered over the captain’s chance of taking part in the friendly tournament due to a back injury that kept him out of training for two days. But the key striker finally resumed practice on Sunday and is eager to decorate his portfolio with a special milestone.

“I cannot wait for the opportunity to win my 100th cap. I’ve got so many flashbacks of what I’ve been through as the match is getting closer. It makes me happy though,” said the Muang Thong United forward, who would have passed the century mark during the China Cup in March but for an ankle injury that forced him to pull out of the exhibition event.

“I still feel the injury but it’s getting a lot better, maybe 80 per cent now. I finally returned to team training and things are going well,” said Teerasil, who has scored 43 goals in 99 appearances with the senior team since 2007.

The game with Vietnam will be a mouthwatering showdown between the two leading football countries in Southeast Asia. Teerasil regards the game as a battle for dignity.

“Playing Vietnam, no matter what the tournament or age of players, is never easy. I have not played Vietnam for several years but I can see they keep improving. But I believe Thailand have also elevated our standard as well,” the Thai captain said.

“So I expect an entertaining game. Neither side will take a step back. It will be a battle for dignity.”

Meanwhile, Samut Prakan City’s midfielder Picha Autra has been recruited by coach Sirisak Yodyadthai to replace Buriram United’s Narubadin Weerawatnodom who withdrew from the squad with a knee injury.