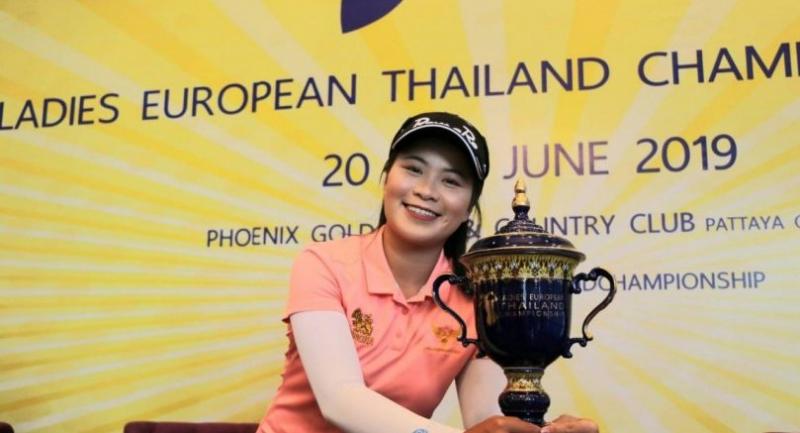 CHON BURI - DEFENDING champion Kanyalak Preedasuttijit has her eyes firmly fixed on retaining her crown as she returns to the Phoenix Gold Golf and Country Club for the 300,000-euro Ladies European Tour Thailand Championship in Pattaya later this month. Players and organisers in a photo session at the press conference on Tuesday.

The 21-year-old benefited from familiarity with her home course to beat South Korean amateur Selin Hyun by one stroke for her biggest career victory. She also became the second Thai champion in the event after Atthaya Thitikul in the inaugural edition in 2017.

The Chon Buri-based golfer plans a three-week preparation here ahead of defending her title in the country’s only LET event, from June 20-23.

“There’s no pressure at all,” said Kanyalak who has spent most of her time playing on the LET and the China Tour. “I have three weeks to get used to the course and will work on my short game which is the key for me here,” added young star who also owns a cosmetic business.

“Everybody stands an equal shot at winning on this course, depending on who has the best momentum at the time. As for me, I’d like to have good results again. I still have time to learn minor things on this course before the tournament,” added Kayalak who as the Thailand Championship winner received a full card for the LET including berths in two Majors, the British Open and Evian Championship last year.

She has entered seven LET events this season and posted two top-20 finishes, plus a top five on the China LPGA Tour in Hong Kong.

“One of the challenges playing in Europe for me is the time difference and course conditions that are a lot tougher. The courses are a lot longer than here. I always find it hard to get out of the difficult areas,” added Kanyalak who is in no hurry to compete on the LPGA as she needs a few more years to shape up her game in Asia.

A total of 126 players – the top 70 from the LET, top 40 from the Thai LPGA and 16 sponsor invites – will compete over 72 holes and four days in the LET Thailand Championship, with the top 60 after 36 holes making the cut for the weekend.

For live coverage tune to TrueSport HD3 on June 22 and 23 from 1pm-4pm. Day tickets at Bt100 are available at the course, with free entry to under 18s and over 60s.