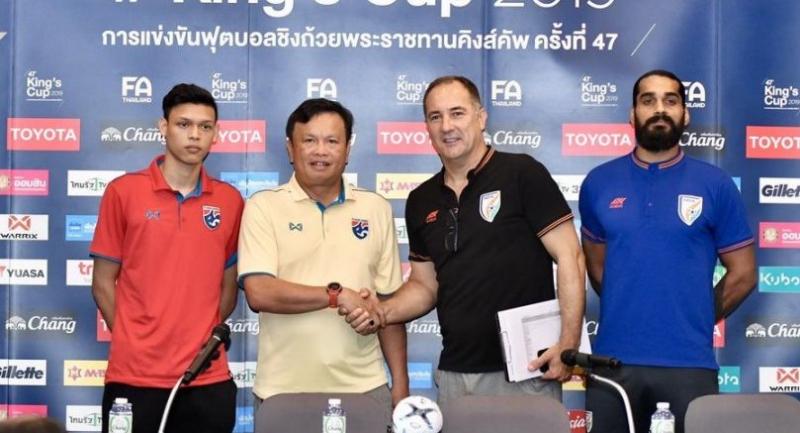 National coach Sirisak Yodyadthai hopes to redeem Thailand’s pride as his side and India face off on Saturday in the King’s Cup third-place playoff in Buri Ram.

Sirisak’s message is clear: winning is the only way the Kingdom can restore their dignity after Wednesday’s painful defeat to arch-rivals Vietnam.

“I encouraged the players in a meeting after the game. I told them to keep fighting,” said the 50-year-old. “We discussed the mistakes we made and we will be trying to achieve the best result we can against India. The team spirit remains the same.”

Unlike the game with Vietnam, Sirisak said several team changes should be expected, most notably the return of captain Teerasil Dangda, who had to sit out the previous game due to injury.

“We will change several players definitely,” Sirisak added. “Some still have injuries while others are readier in terms of their physical condition. Teerasil will be ready this time – he is 100 per cent now.”

After injury robbed him of two chances to win his 100th cap, in the China Cup and Wednesday’s game, the 31-year-old striker is expected to finally achieve the milestone.

He will be one of Thailand’s key strikers, as will young gun Supachai Jaided, as they seek revenge over an Indian side that shocked them with a 4-1 trouncing in January’s Asian Cup.

“India is a strong team that cannot be underestimated. We have to focus on the game to achieve a good result. We will have home advantage and fan support which shall benefit us,” said Buri Ram United’s Supachai.

India lost 3-1 to Curacao on Wednesday and coach Igor Stimac said he did not have high hopes for the Thailand game due to fitness concerns over many of his players.

“After a tough game with Curacao, it’s important for us to get players fresh for the next game. We come here to compete against top teams and it won’t be easy to play Thailand,” he said.

“Although we beat Thailand before it was a different match against a different coach [Milovan Rajevac]. I don’t expect much on Saturday. I don’t want to have a headache about more of my players getting injured.”

The third-place playoff will kick off at 3.30pm and can be seen live on Thai Rath TV 32. The final, between Curacao and Vietnam, will follow at 7.45pm.